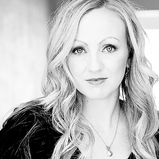 A new mom’s survival guide to visiting your local sushi restaurant with a toddler in tow and still getting invited back. 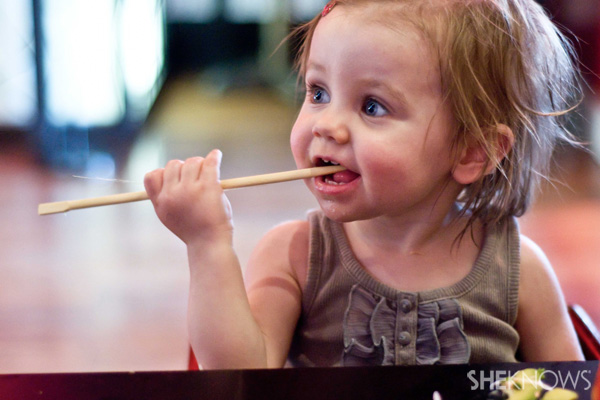 What to order &
how to stay sane!

A new mom’s survival guide to visiting your local sushi restaurant with a toddler in tow and still getting invited back.

As a new mom there were a few things I’d fallen in love with during my childless years that I refused to give up once I was an official member of Club Mom. One of those things was eating at nice restaurants that did not mandate that waitstaff lead birthday songs or employ the use of woodland creature-style mascots. Our local sushi bar was one of those places. Although the days of leisurely dinners and uninterrupted wine-fueled conversations were on hold for the moment (OK, years, on hold for years), I was bound and determined to figure out how to not just visit my favorite dining establishments, but to enjoy myself. I was doing this not just for the sake of my husband and me, but as a way to introduce my daughter to new foods and show her the importance of culinary exploration, hoping that one day she will fall in love with it as much as we have.

And, mama needs to get out of the house.

First: Know when to go!

First, and most important, is timing. Kids are wiggly, rowdy, prone to tantrums and, if they aren’t yours, completely annoying. I get it. In my experience with a very mobile child, the best time to go is about 5 p.m. More like a late lunch in my childless days, but it’s a big part of ensuring a low-stress meal. Most restaurants are nearly empty, allowing for immediate seating, shorter ordering-to-eating lag time and fewer patrons to irritate if wiggly child has a meltdown. Also, most people who DO favor a 5 p.m. dinnertime are often senior citizens who tend to forgive toddler shenanigans and other moms who are just grateful that said screaming child is not theirs. 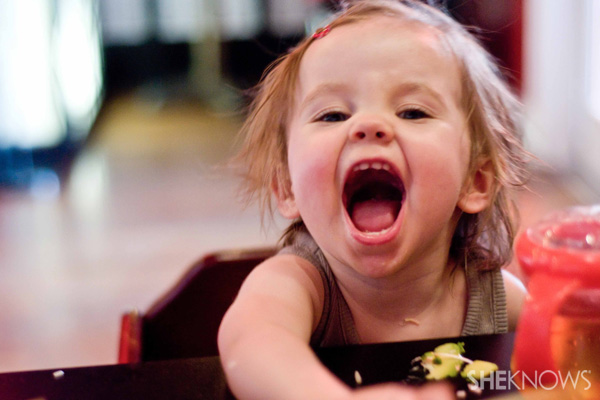 What can you order?

Now, here we are, with mostly well-behaved small person, seated and ready to go. What CAN you order at a sushi restaurant? Well, when it comes to raw fish, it’s tricky. There is nothing inherently wrong with raw fish and plenty of cultures feed sashimi to very small children. The problem is the risk of food poisoning coupled with the fact that children under 5 are highly susceptible to foodborne illnesses. All of this can result in major (and I mean unspeakably, I can’t even type it, horrible) consequences. So my official, on the record, recommendation is no raw fish for your wiggly toddler. There will be time for that later in life. But don’t be discouraged, there are still plenty of foods on the menu for your tiny human to eat. At a very young age, my daughter began to love edamame, and, lucky for us, it arrives at the table mere moments after ordered, although you will still have to shell it. For the same reason, a small side of rice is a great menu option as well. Order both while you are in the process of sitting down in the hopes that they will be at the table by the time your adorable tiny human is settled into the highchair.

Check out these safe sushi choices for kids >>

You’re on a roll!

But what about rolls?! You came to a sushi bar, you want rolls! Although the general public will tend to flip their lids about mercury poisoning, the risk is really low. In most cases, you would have to eat more than 12 ounces a week for it even to be a factor. If your child rarely or never eats fish, just make sure they don’t eat the equivalent of a large burrito’s worth of fish, and you shall be fine. If you still have concerns, the types of fish to avoid, according to the CDC, are: shark, swordfish, king mackerel and tilefish. Cooked salmon or shrimp rolls are a great option. California rolls are generally made with Krab (yep, just like something SpongeBob would serve you, that crab is spelled with a K!), which tends to be an amalgamation of various types of fish, both shellfish and fin-bearing fish. Although some fish in that Krab may be high in mercury it won’t be the majority, making California Rolls a safe option. When ordering your tiny wiggly human a sushi roll, ask that they do not add wasabi to the roll. Nearly all rolls are made with a small amount of wasabi inside the roll. Some chefs tend to add more than others and that can lead to a painful first sushi bite for a tiny sensitive palate. Veggie rolls, filled with cucumbers and avocado, are a fabulous choice as well. 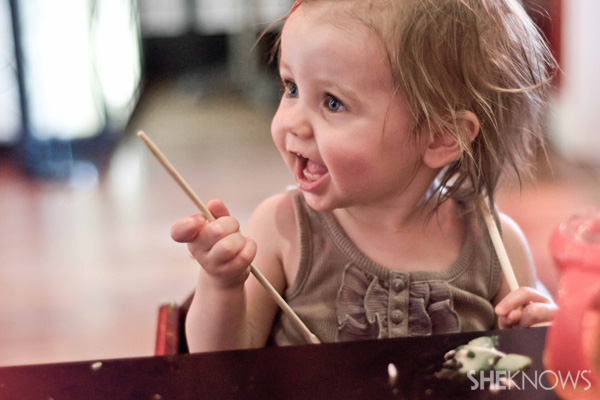 Waiting is the hardest part

So you’ve placed your order, now what? Let’s back up to before we started this brave and daring sushi adventure. Sometime prior to your adventure stop by the dollar section of your local Target and grab a few things. To be honest, it doesn’t even matter what they are. Measuring cups? Sure! Crayons? Even better! Squeezy stress balls? Hey, you might need that one for yourself. Wrap them up like presents and place them in the depths of that oversized handbag you most likely own now that you are a mom, pulling them out at dinner to distract and amuse your child for tens of minutes! Cheap dollar store items now have untold value. Once that has reached its inevitable end, you will need backup. If you own a portable internet-capable device (tablet, smartphone), download Sesame Street prior to your departure (what? It’s educational!) for an emergency backup plan or visit YouTube for an Elmo search. Another great strategy is to put small (but not choking-hazard-small) toys inside small Tupperware containers and put those in your Huge Mom Bag. Especially if these are toys your child has never seen before, it will amaze and astound them, and they will be completely entranced by placing the toys from one container into the other. Also, an easy way to bring home leftovers! Look how ecofriendly you are.

You survived. Your first trip to the sushi bar accompanied by a tiny human, and you lived to tell the tale.

Don’t want to chance it? Make sushi at home!

Avocado, cream cheese and cucumber sushi rolls
Deep fried sushi
How to make your own sushi

Martha Stewart’s Creamy Lemon Chicken Is the One-Pan, 35-Minute Dinner of Our Dreams