The Taste is all about one delicious spoonful and even Nigella Lawson says she wouldn’t want to face these judges. Hear what else she has to say while dishing on ABC’s new cooking competition. 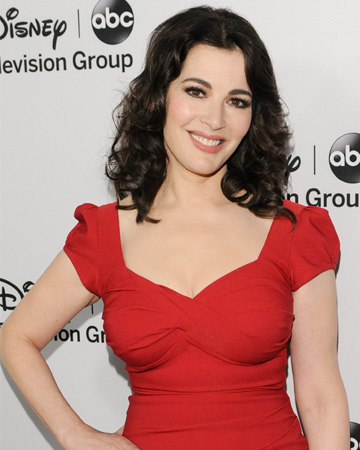 Nigella Lawson, along with Anthony Bourdain, Ludo Lefebvre and Brian Malarkey, will sample one blind spoonful to determine the fate of the competitors on The Taste. Premiering Tuesday, Jan. 22, the drama unfolds as professional chefs and home cooks battle it out in the kitchen to create the tastiest single spoonful in hopes of advancing to the next round. SheKnows had a chance to chat with Nigella Lawson about high-pressure cooking, the daunting task of judging and more.

SheKnows: Shows like The Taste include a great deal of pressure and stress for the participants. What was the most important piece of advice you gave your team about cooking under pressure?

Nigella Lawson: I think it’s important to accept rather than deny the pressure: There is no getting away from it and for me to try and underplay that would surely add to the anxiety. So, accept the pressure then focus on the food, is what I say. This way the pressure can help fire up creativity as the contestants can use the adrenalin as a force for good — that’s to say fight, not flight!

SK: What would you say are the most important attributes to a participant on the show?

NL: Ultimately the most important attribute is a good palate: Everything pales in comparison. But you do need other qualities, and focus and drive and tenacity are skills needed in the kitchen and out of it for any success in life.

SK: Without giving anything away, can you say if you were surprised by the abilities of the home cooks compared to the professional chefs?

NL: As a home cook who flies the flag for home cooks everywhere, I can get irritated at the assumption that professional chefs are superior. Of course, they have greater techniques and so forth, but food — as indeed this program — is all about the taste, and home cooks often have the edge here as we customarily cook to give pleasure rather than to dazzle with our skills. So, no, I was not surprised by the abilities of the home cooks, but I was certainly very proud of them.

SK: How much do you think tasting blind changed your perception of the food?

More: Get more reality TV insight from a celebrity chef: Read our Q&A with Anne Burrell.

NL: I think tasting blind makes a huge difference. Not least because we are always taught that feasting begins with the eyes, and so we can easily get seduced by a pretty looking plate, for good or bad. It can make us want to like a dish more than our palate does truly, or it can lead us to be disappointed. Either response can muddy one’s instincts, but when you’re tasting blind, it really is about the experience of eating, the balance of flavors and textures, that counts. Of course, it can — and did — lead to embarrassment: We often thought we were eating beef, and it turned out to be lamb, and vice versa. Even our very eminent guest judges had a problem with protein identification! And of course the tasting blind is further intensified by the fact that we only ever have one spoonful to go by. There is no possibility of deeper consideration; we can judge only by first impressions.

SK: Would you say simple dishes win out over complicated dishes in terms of taste?

NL: Absolutely not. If all you have is one spoonful, that spoonful must seduce. If it’s too simple, it underwhelms; if too complicated, it overwhelms. Like cooking, it is all about balance. So there needs to be enough going on but in an unfussy way. I think this often played to the home cook’s advantage as the professional chef can overthink everything, and his or her knowledge of complicated techniques can dominate, when what we are looking for is taste, taste, taste.

SK: Did you find that you could start to determine who made which dish by the end of the show, based on technique?

NL: I often thought I could tell (although I really tried not to try and second guess, as it muddied my reactions and seemed against the premise of the program) but whenever I did, I was wrong. It’s extraordinary really, but I think that’s also because we never saw a finished dish, just ate a spoonful, so that the full signature of the cook or chef was never on display. As judges we were constantly surprised at who we found in the hatches once it was time to identify the creators of the respective dishes.

SK: If you were to face a fellow judge with a blind taste of a dish you made, which judge would make you the most nervous?

NL: All of them! I’d be terrified. To have to sum up your entire cooking life and love for food on just one spoonful — how do you do that? I really came to admire the contestants as their task was incredibly hard. I’m not sure I’d be brave enough to do what they did; in fact, I know I wouldn’t.

SK: What is your best tip for a home cook who wants to cook an impressive meal?

NL: Never, ever think of impressing people, just concentrate on giving them pleasure. It’s not about making people think highly of you, it’s about your food making them happy. That for me is the essential truth of cooking.