We all know you can get great European cheese, but some of the best cheeses you’ve never had are being made by smaller producers all across America. Check out these five cheese artisans who are producing a superior product that will make any cheese lover swoon. 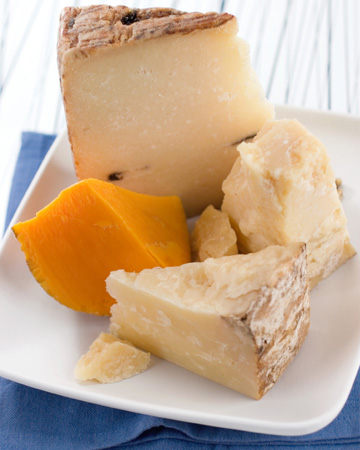 Has there ever been a food more beloved than cheese? Eaten by itself, on a cracker, in a burrito, on eggs or a million other ways, it has the power to save an average dish, make a good dish legendary and keep a vegetarian from going vegan. There’s not really bad cheese, but that doesn’t mean all cheeses are made alike. More and more artisan cheese vendors, especially in the United States, are making superior cheeses at a fraction of the cost you would expect to pay for an import from Europe.

You’ve likely not heard of many of these cheese artisans until now, but let’s change that. Here are five of the best that you simply must try. Today, in many cases, what you can buy from small farms in Wisconsin, Kansas or California rivals most of what you can buy from France, Italy or Spain.

Green Dirt Farm is a small cheese and lamb producer about 40 miles outside of Kansas City, Missouri. They currently produce four different types of sheep’s milk aged cheeses (three of which were given awards by the American Cheese Society) and six different varieties of spreadable fresh cheese (two of which, plain and nettle, were given awards by the American Cheese Society). Still, the value of a cheesemaker is not in their awards but in their product, and Green Dirt Farms has been getting their product in stores and restaurants for several years. They have an online store if you want to try ash-dusted Dirt Lover or a tangy nettle or any of their other varieties.

An artisan creator in Napa Valley, Bohemian Creamery produces 10 different cheeses in a number of traditional styles and milk. Available throughout the San Francisco region (and available by phone order from certain retailers), cheese lovers can choose from the Asiago-like Capriago, the soft goat’s milk HolyMoly or the sheep’s milk Bo Peep. Bohemian Creamery doesn’t boast as many awards as some other artisans, but the fact they are available in some very prestigious cheese shops in Northern California speaks to their quality and reputation.

Crave Brothers are fantastic cheesemakers and terrific stewards of the planet. Their creamery, which is run on 100 percent green energy, has created five different creamy, mild cheeses that have been winning awards from culinary magazines and the American Cheese Society alike. Their flagship product is probably the Petit Frere, a soft ripened cheese that is their most decorated offering. It can be purchased online, along with their other products, or in stores across the Midwest.

Carr Valley has been making cheese for more than 100 years and boasts a large selection of products made from cow, sheep and goat milk, as well as producing mixed milk cheeses. However, they are perhaps most famous for their cheddar cheese, aka their Famous Cheddar! Being from Wisconsin, they sell fresh cheddar cheese curds and cheddar cheeses that have been aged anywhere from a day to 10 years. They also feature smoked cheddars in addition to regular aged varieties. Even better, they can ship orders placed on their website.

Family-owned and operated since 1922, Widmer’s Cheese has been recognized nationally for a number of their cheeses. Being from Wisconsin, they, too, have a wide selection of cheddar cheeses, both white and yellow. They also have a selection of Colby cheese and many different curds to choose from. Their web presence is rather impressive and offers a range of cheeses you can purchase, but be sure to check out the Widmer varieties section for just the cheeses they produce.

These are just a few cheese options available to the connoisseur. Get out and find the local artisans producing cheeses near you.