If there’s one Christmas tradition we can’t live without in the Southwest, it’s tamales at Christmas (being of Hispanic origin is not a prerequisite). A great cool-weather recipe, these tamales will wow your friends, even if they aren’t quite sure why it’s a tradition. 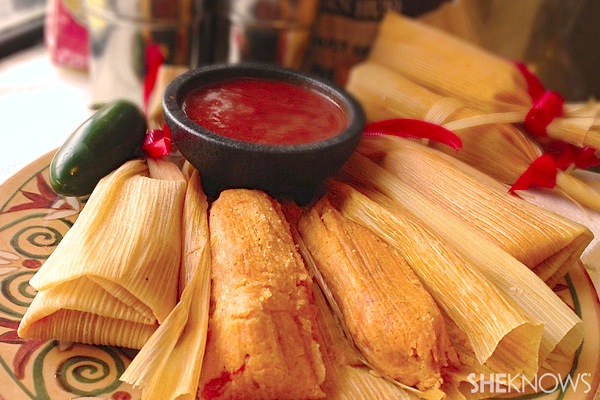 Tamales are a traditional Mexican food served at special occasions. Even though you don’t really need a special occasion to make them, they do take some time to make. But they’re actually really simple (in fact, until it’s time to roll them, the slow cooker, stand mixer, refrigerator and stove do most of the hard work). We do recommend you plan to cook them over two days, although doing them in one day is certainly possible.

On the first day, you’ll want to prepare your meat and start the masa dough. Masa (which means “corn”) dough can be purchased in wet or dry form. The wet form needs less liquid, so be aware of that when using it. We’ve given you the recipe using masa harina (corn flour).

When it comes to meat, pork is the most traditional meat used in tamales. Some people use beef as an alternative, but we recommend chicken if you don’t like pork — as “the other white meat,” pork is similar in texture to chicken when it’s cooked.

Off-the-bone cuts are easiest (which is why we prefer them), though some people find bone-in cuts have a juicier finish. But if you carefully follow our directions, boneless meats will be just as juicy.

We never said making tamales was simple, but it is actually easy. Just read all of the instructions up front so you know what’s going on before you begin (and can plan your day around it). Most importantly, have some fun with it. It’s Christmas, after all.

Day 2: Make the sauce, finish the filling and dough, and steam

How to assemble and wrap tamales

Ironically, the most intimidating part of making tamales for many is the wrapping. But if you can wrap a burrito well or a Christmas present well enough, you’ve got it covered. Just remember that tamales are pretty forgiving, so if it isn’t perfect, don’t be too hard on yourself.

Before you begin, cut two of the soaked wrappers into strips lengthwise. Leave the wrappers in the soaking water to keep them soft while you’re working.

Spread a soaked wrapper out in front of you and use a paper towel to remove any excess water from both sides.

If your wrapper has a pointed end (not all do), place that end away from you, making sure the side that’s face up is the way it naturally tends to curl. Imperfections in the wrapper are OK as long as they don’t impede your ability to roll the tamale. If you mess anything up, you can always scrape the ingredients off separately and start over.

Place 1/4 cup of the masa dough in the center, toward the bottom, of the wrapper. 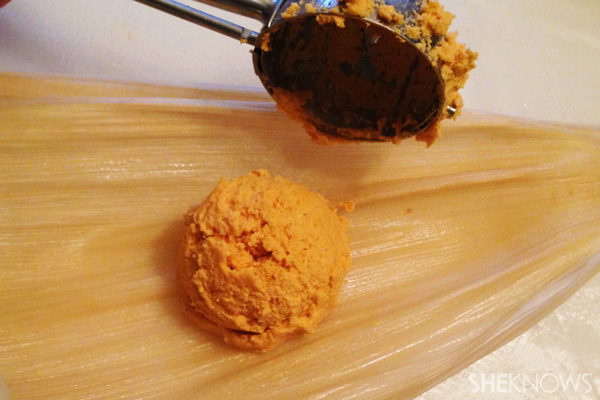 Use your fingers to smash and spread the dough into an approximately 4-inch square (it doesn’t have to be a perfect square), ensuring there’s plenty of room on each side for wrapping (at least an inch on the bottom and sides). 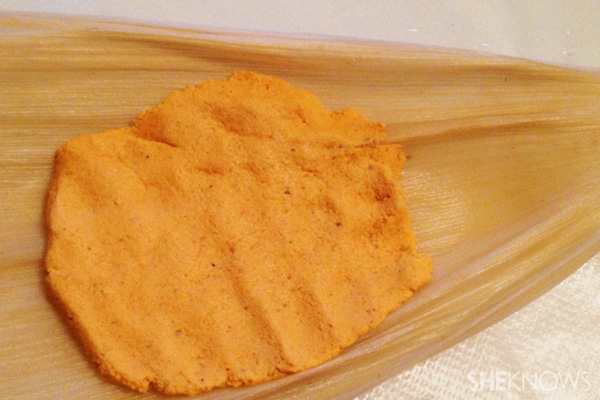 Spoon a heaping tablespoon of the meat mixture straight down the center (vertically) of the masa dough. 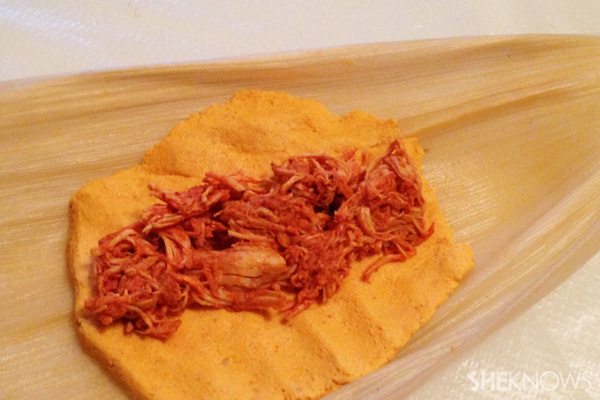 Use the corn husk to wrap the masa dough around the meat mixture, making sure the dough completely encompasses the meat (it’s OK if the ends of the cylinder it creates are open). If necessary, you can use small pinches of dough to fix any holes or incomplete seams in the dough. 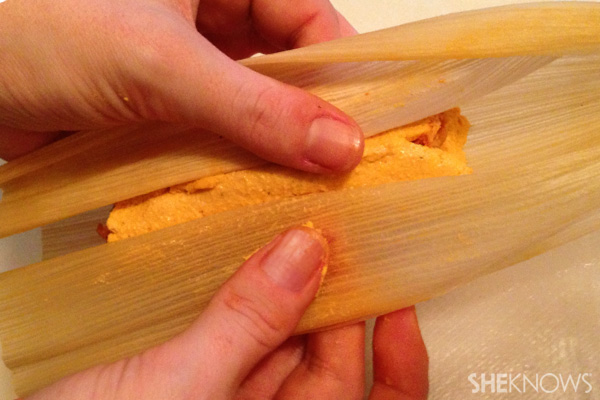 Lay the tamale back on the countertop flat and fold the bottom of the wrapper up over the raw tamale (be careful not to smash the tamale). Then fold one edge of the wrapper over, then the other in a burrito-style fold to complete the wrap. 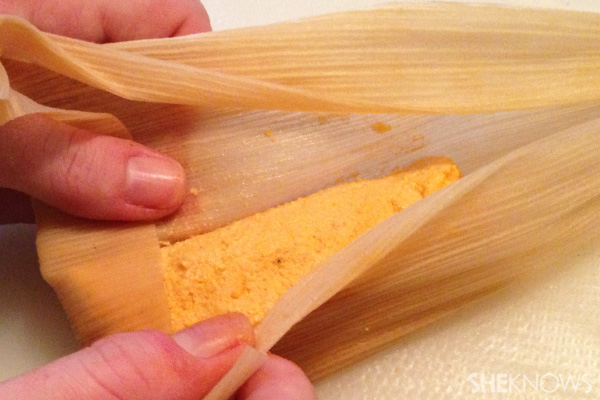 Use a strip of the cut wrappers to tie up the remaining end. Use double ties if necessary.