In the U.S., Ashkenazic Jewish foods (like gefilte fish, matzo ball soup and latkes) are the most well known. This Hanukkah, look to Sephardic Jewish traditions to revitalize your holiday menu. 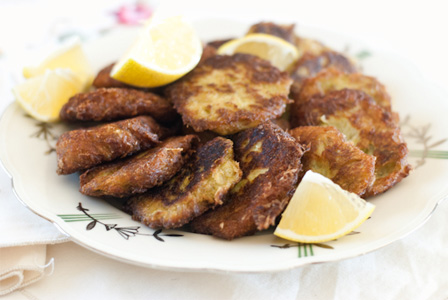 Sephardic Jews are originally from the Mediterranean and Iberian Peninsula, hailing from places like Greece and Spain. After the Spanish Inquisition, Jews were expelled from Spain, and so the Sephardic community was dispersed and many ended up in Turkey, and as far as Africa. Where Ashkenazic Jews traditionally spoke Yiddish, Sephardic Jews spoke Ladino, a hybrid of Spanish, Hebrew and a number of other languages.

Sephardic foods differ greatly from their Ashkenazic cousins, reflecting their Mediterranean heritage. For Hanukkah, Sephardic Jews also celebrate with menorahs and fried foods, but the recipes differ. Here are a few favorites to inspire you this Hanukkah.

Whereas kofte, popular in Turkey and the Middle East, are meatballs, Sephardic keftes (also known as keftikes) are more like patties and very often do not contain meat. Keftes de prasas, or leek patties, are one of the most popular varieties and are eaten at Rosh Hashanah, Hanukkah and Passover (for Passover substitute matzo meal for the breadcrumbs). Recipe below.

Get tips for hosting the ultimate Hanukkah party >>

Probably the most traditional Sephardic Hanukkah food, bimuelos are fried dough puffs. As Claudia Roden writes in The Book of Jewish Food, “Bimuelos is the Judeo-Spanish name for the little flour-and-yeast fritters. In Egypt, where they were sold on the street, they were called ‘zalabia,’ and in Iraq, Persia and India they were ‘zengoula.’ All over the Middle East they were eaten at Hanukkah.” Whatever you want to call them, these sweet dumplings will steal the show at any meal.

Deriving from the Arabic word for sponge, sfenj are North African yeast doughnuts. The Jews of Morocco, Libya and Tunisia make them on Hanukkah as they are fried in oil. Some recipes call for orange zest to be mixed into the dough, others dip them in honey at the end and others sprinkle them with powdered sugar. However you enjoy them, sfenj are irresistible.

According to TikTok, This is The Best Way to Cook Instant Ramen