Mainstream foodies insist that brining your turkey is the best way to get a tender, moist roast. While that’s true, there are some drawbacks to consider before making that decision. 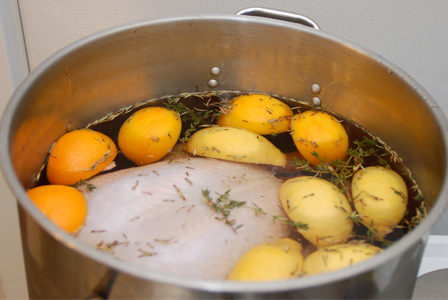 Before we discuss brining’s merits, let’s talk about why it’s done. Brining is soaking a raw bird in a solution of sugar, salt and (in some recipes) other spices, veggies or broth. It not only introduces great flavor, but it keeps leaner meats from losing as much moisture during the cooking process. In fact, it reduces moisture loss by about half.

So why on earth wouldn’t you want to brine? Well, when you do that, you actually change the physical composition of the meat. The scientific explanation is pretty cool if you’re a food nerd.

Basically, the salt in the solution modifies the meat, attaching to the long, entwined muscle proteins, which begin to push away from each other. This allows more water and sodium to settle in the meat and weakens the fibers. Eventually, this leads to extra moisture inside the weakened fibers, so when the heat of the oven inevitably causes the moisture to release (the same way you sweat when it’s hot outside), the bird retains more of the moisture.

For the food nerds who read the scientific explanation above, you probably already caught the two main negative keywords. “salt” and “weaken.” The salt isn’t optional in a brine. It’s part of the scientific voodoo that makes the whole process possible. It’s part of what leads to the weakening of the muscle fiber.

When you brine your turkey, you don’t just risk over-salty flavors. Sodium is linked to high blood pressure and heart complications. While the extent of the effect it will have on you depends on your body’s response to salt, it’s best to limit your intake, especially if either of those health concerns runs in your family. (And ladies, it also leads to bloating that can make you appear up to 9 pounds heavier than you really are.)

But aside from the potential health hazards, it creates a potential flavor hazard. Weakening the actual meat of the animal is just going to cause it to taste differently. That’s why so many brine recipes call for extra ingredients. To add that flavor back in.

If you’re committed to brining, try substituting Celtic sea salt or Himalayan crystal salt. They’re a little damp and often gray or pink in color and don’t contribute to high blood pressure like table salt (which is actually sodium chloride, a type of sodium not found naturally in the body, which is why we have trouble processing it). Whatever you do, skip the pre-brined birds. They’re loaded with a chemical called sodium nitrate, which contributes to cancer.

What do you think? Are you still going to brine your bird this Thanksgiving? Tell us in the comments below.