Garbanzo beans and pita bread go together like ham and cheese. But instead of the usual hummus, why not keep the beans whole and cover them in a dressing full of Indian flavor. 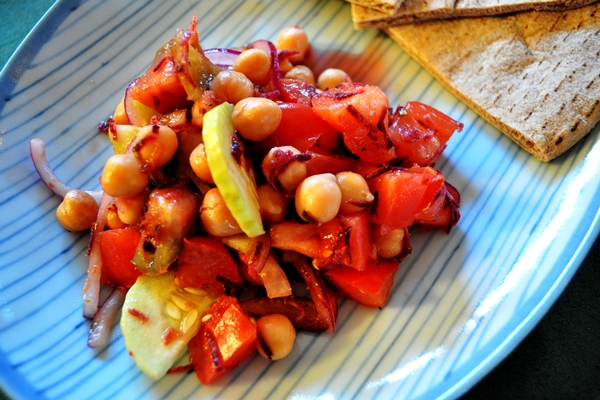 One of my favorite appetizers is hummus and pita bread. The two are not only delicious, they’re quite filling and unbelievably healthy. But just because I like hummus, doesn’t mean I don’t like garbanzo beans in their original chickpea form. I actually like them so much, I always have a can in the cupboard so that I can add them to salads. I’m such a fan, in fact, I don’t think a salad is finished if it doesn’t have a handful of garbanzo beans mixed in. So when Fine Cooking suggested making an entire salad out of garbanzo beans, I jumped right on board.

What makes this salad different from most aren’t the ingredients in the salad, but the ingredients that go on top. A salad can be good if the ingredients are fresh and tasty. But what makes a salad great is its dressing, and this dressing is awesome. Who knew spices that are usually reserved for curries and tikkas would combine to make the perfect salad topping as well? So next time you’re in the mood for a light salad, leave the ranch in the refrigerator and try this Indian-inspired dressing instead.