Nothing quite hits the spot like a giant slice of apple, pumpkin or cherry pie. As good as these pies are, why not add some variety to your boring dessert spread with, say, a pie made with beef fat, bacon or potatoes? Or maybe a shoofly or funeral pie is more to your taste? 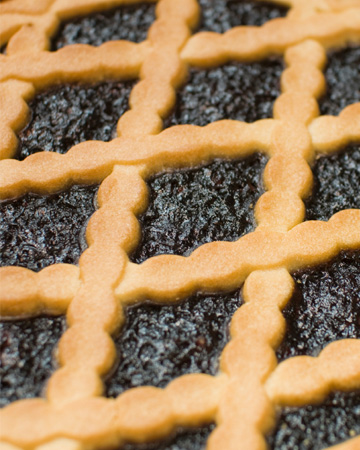 Even though a pie made with beans or bacon makes us a little uneasy, we’re not ones to judge something before we taste it. However, we are drawing the line at the “funeral” pie. We don’t care how good it tastes.

You’ve heard of cherry, apple and strawberry pies, but what about grape? Many wine enthusiasts (and makers) use their pitted leftover wine grapes in pies instead of throwing them out! Wine grapes are typically much sweeter than regular grapes so they make a great fruit for a dessert pie.

Nothing like ending your day with a slab of bean pie, right? As unappetizing as this sounds, bean pies are actually quite sweet when made right. Many bakers use navy beans and pair them with evaporated milk, sugar, butter and spices like cinnamon so the end result is sweet, spicy and very hearty. If you want to attempt this, just be sure to puree the beans so you aren’t left with chunks (for obvious reasons).

This apple bacon pie was a favorite here at SheKnows during the summer, and it’s not hard to see why. Bacon is good with anything, even apples! The use of bacon in place of the top crust of the pie gives each bite the perfect balance of salt and sweet. Plus, adding bacon is a surefire way to get your husband or boyfriend to eat your dessert, even if they hate pie!

Sweet potato pie is a Southern favorite and, surprisingly, doesn’t taste as weird as it sounds. By pairing the potatoes with butter, brown sugar, pecans, sweet milk and whipped cream, the end result is a sweet, creamy mousse that tastes a little like pumpkin. As good as it tastes, don’t expect your kids to jump in excitement when you say “potato” and “pie” in the same sentence.

Nothing makes a pie sound more delicious than putting the word “fly” in the title. The name for this pie actually comes from the Amish. Apparently the pie is so sweet, when it cools it attracts flies so the bakers had to “shoo” them away. The pie itself is more of a sweet coffeecake made with a molasses crust and topped with whipped cream.

Before you scream, this pie is luckily not made with real fingers. In fact, it gets its very strange (and rather gruesome) name from the preparation of the pie. Bakers in the old days would stir this pie (also titled sugar cream) with their fingers to keep the crust from breaking during baking. Nowadays you can use a whisk or fork to stir (to avoid having your finger end up in the pie).

Mincemeat pie has been around for ages (since the 13th century to be exact) and is an extremely popular dish during the holidays in the UK. It is typically made with a selection of fruits (like apples, raisins and cherries), sugar, sweets and beef suet, which is raw beef fat. As popular as these are, we think we’ll leave the fatty meat pies for Sweeney Todd.

Made from minty cream, green food coloring, dark chocolate cookies and sugar, this is one of the most universally loved pies out there, especially during the holidays. The reason for the strange name is rather simple, it was called grasshopper pie because its bright green color resembled the skin of the insect. There is also an earlier version of the pie from the Philippines that used real grasshoppers in the filling. To keep us from gagging, we’re trying to forget that last one.
9

If there is one place green tomatoes do not belong, it’s in a pie. However, leave it to the queen of deep-fried cooking, Paula Deen, to make a pie out of Crisco and green tomatoes. She paired the tart tomatoes with raisins and sugar to sweeten them up and baked them into a flaky pie crust. We don’t know about you, but we’ll keep our tomatoes in our salsas.

And the winner for the weirdest (and worst) name ever for a dessert goes to funeral pie. This pie (more appropriately named raisin pie) is commonly served at Amish funerals, hence the morbid and depressing nickname. Unless your family has a sick sense of humor, we’d suggest sticking to “raisin” pie when putting this one on your menu.