You’ve seen the picture. Mama hands papa a big, golden brown bird while a family sits around a table filled with stuffing, mashed potatoes, rolls and all the other trimmings. 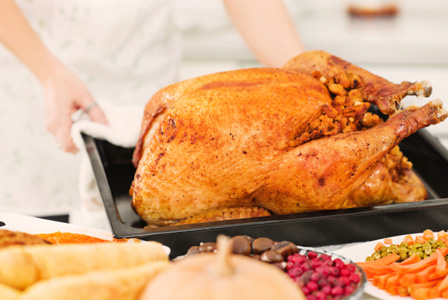 The problem is you’re on a budget. After you buy the Thanksgiving bottle of wine you’re going to need to put up with your in-laws, you just don’t have the budget for a big meal. No big deal! Here’s a menu you can put together for the price of a turkey and a dollar or two per person. You’ll have all the flavor you’d want for a Turkey Day meal without the cost.

Picture the iconic Thanksgiving feast: a table full of dishes ranging from perfect roast turkey to cranberry sauce to mashed potatoes to so many different types of pies. Now, imagine how many gajillion dollars you’d have to spend putting that meal together. However, fear not, an inexpensive Thanksgiving dinner can be yours for about a little more than $30, not including the price of the turkey and a few items you should have around the house (salt, pepper, sugar, flour), without sacrificing quality or variety.

This is the one item that is going to cost, no matter what. However, because price is an issue, you don’t need a huge bird. In fact, smaller birds cook more evenly and tend to stay moister. Still, whatever you do, make sure your turkey comes with giblets and the neck. That will be important.

Get a five-pound bag of potatoes, which will run you about $5. In addition, buy two cans of chicken broth, which will cost about $1.50. You’ll also need a little cream from the peas and a pat of butter from the pie, but we won’t add their cost here! To make the mashed potatoes, just boil them and mash them with salt, a little cream and three tablespoons of butter.

This dish will give your guests a little wow that they weren’t expecting from a budget meal. Buy a bag of frozen corn (about $2), a few stalks of celery for about $1 and some bacon, which you can hopefully find for about $5.

Creamed peas are easy. Get some frozen peas for about $2 and a small container of cream for about $4. To make this dish, boil the peas in salted water until they are ready and add the cream.

What would Thanksgiving dinner be without dessert? To keep this year’s feast affordable, but delicious, we’re going to make our own apple pie. All you really need are apples (about $3), butter (about $5) and cinnamon (which hopefully you can find for about $1).

(Yes, it’s a little over, but you’re not going to use all the bacon or butter, so you’re ahead on groceries!)  With the price of the turkey, you’ve got an entire party for less than $50.

A budget bash!
Entertain for $10 per person
More fun, less stress this season