Not everyone’s going to be eating turkey on Thanksgiving. Still, it’s Thanksgiving for those who have made the dietary decision not to eat meat, and they deserve to stuff themselves silly, too. Check out these meatless alternatives on the market for vegetarians and find out how to turn them into decadent holiday delights. 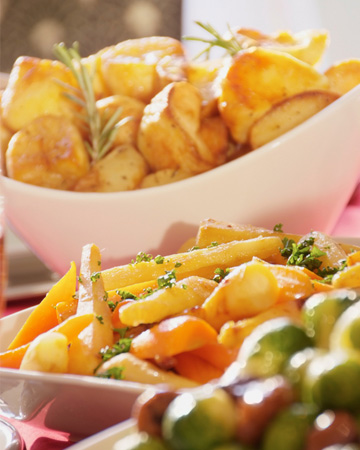 Thanksgiving is the national celebration of eating too much (as well as being thankful, our national history, etc. etc.). Still, the holiday has turned into a day when Americans across the country gather together and stuff themselves silly with turkey, dressing, mashed potatoes, rolls, pies and other dishes as well.

However, if you’re vegetarian, it’s pretty easy to feel left out of the fun on Turkey Day. For the most part, all of the traditional dishes are meat-based. Gravy has meat giblets, mashed potatoes are often made with broth and stuffing usually has some bits of meat in it. That doesn’t even include the main part of the meal: the turkey.

The good news is that making Thanksgiving dinner vegetarian friendly is not difficult. Pretty much every traditional Thanksgiving side dish recipe can be made meatless using vegetable broth and omitting the meat. However, that still leaves one small problem: What to do about the turkey? Fortunately, there are several meat replacements you can proudly serve this Turkey Day that feature all of the flavor and none of the meat.

Here’s a few of the different types of meat alternatives you might serve for Thanksgiving categorized by type. Of course, the makers of faux meats tend to keep some of the secrets of their products to themselves so there may be some overlap among the categories, but these tend to be the broad buckets into which most meat alternatives fall.

Seitan (pronounced SAY-tan, also called wheatmeat or Buddha food) is a meat alternative made by kneading protein-rich flour into a hard dough. The resulting mass has been prominently featured in several Halloween articles due to its sort of disgusting appearance, but when cooked it has a very meaty texture. It’s, however, not suitable to those with gluten allergies.

Making seitan yourself is extremely easy, requiring nothing more than two cups of high-protein wheat flour along with one-and-one-half cups of water and whatever spices you like. Knead the mix for 10 to 15 minutes and you have seitan.

You can also find seitan turkey sold at vegetarian-friendly grocery stores either by itself or as part of different brands of faux meat. These include Tofurkey, which offers a complete Thanksgiving meal, and Field Roast, whose original roasts are delicious.

Mycoprotein was created in the 1960s in Britain by an enterprising lord who wanted to find a new source of protein. This search eventually lead to mycoprotein, which is a protein created by fermenting a certain type of fungus. Still, despite its origins, mycoprotein has been sold under the brand name “Quorn” and has a flavor and texture which is truly meatlike. It can be found in the freezer section of vegetarian-friendly grocery stores and is even a good gateway product for those who still eat meat.

TVP stands for textured vegetable protein and is a faux meat created by denaturing plant proteins (usually soy protein) and creating a protein-rich food product. TVP shows up in several different meat alternatives, sometimes by itself and sometimes mixed with other ingredients. One of the best-tasting products to utilize TVP is Match Meat. Based out of St. Louis, Missouri, Match offers an entire ready-to-cook stuffed chicken which is delicious and easy on the chef.

At this time, Match can be purchased online and shipped, unless you live near St. Louis, in which case, it is available at area grocery stores.

As a side note: What to do about gravy?

Even with a good meat replacer, gravy can still be the bane of the vegetarian Thanksgiving (especially for a mixed meat eater/non-meat eater holiday.)  However, making delicious meat-free gravy is simple.

* Replace with 2 tablespoons cornstarch to make this vegan