Yes, it’s true that fresh tomatoes make a wonderful marinara sauce. But have you ever tried sun-dried tomatoes? Turns out they make an awesome pasta sauce as well. 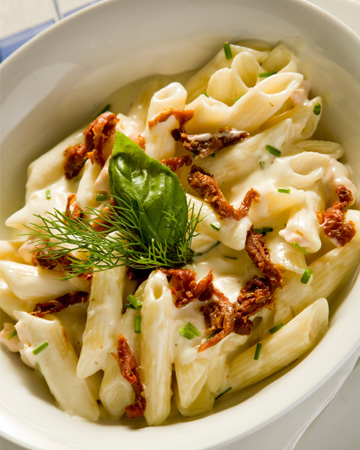 A few months ago, I had dinner at an Italian restaurant that was out of this world. They made a farfalle that was covered in a delicious mascarpone cheese and sun-dried tomato sauce. I couldn’t believe I was such a fan because I hate sun-dried tomatoes. I’m not sure why I don’t like them, maybe it’s the taste, maybe it’s the texture. Whatever the reason, I rarely order anything that has sun-dried tomatoes in it. So, why did I try this pasta dish? Because several people had recommended it. I was so thrilled with my order, I decided to try and make the same dish at home. I couldn’t believe how easy it was. But the best thing about the dish, it was just as tasty as the restaurant version.