Who thought inhaling your food would be the new fad diet? 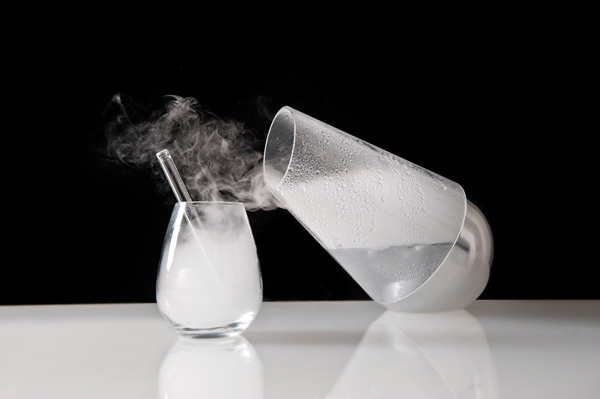 Le Whaf, a revolutionary European gadget, breaks food down into steam. Why would anyone want this? Well, because it takes most of the calories out of your food but retains its flavor. First, food is boiled into a liquid, strained and transferred into a caldron with an ultrasound in the bottom of it that vigorously agitates the liquid until it’s turned into air or a cloud.

Inventors, French scientist David Edwards and French designer Marc Bretillot, were inspired by a product called Le Whif that sprays particles of dark chocolate into your mouth as a low-calorie treat. Le Whaf is gaining in popularity because inhaling this flavored air is thought to curb your appetite. Though we can’t help but wonder if inhaling food-flavored air wouldn’t make us drool for the real deal even more.

So this is essentially how it works. You hover your head above a bowl filled with steam and suck the vapors in through a straw. At first, your mouth will feel dry, but as the smoke settles and condenses, you are able to pinpoint specific flavors. Those who’ve tried it say it’s a taste sensation without actually having anything in your mouth. This also works with alcohol — you can enjoy your favorite liquors without suffering next-day consequences.

Want to sample this gastronomic wonder? For only $167, you can purchase this gadget and test your own recipes at home — if you’re brave enough. Feel free to transform wine, orange juice or your favorite soups into light, refreshing aerosol cuisine. If you want to get really adventurous, boil down your favorite meal, then strain and pour the liquid into Le Whaf and watch it work its magic.

What is molecular gastronomy anyway?

Think of molecular gastronomy as a modern style of cooking where food scientists work in labs to transform ingredients into new solids, liquids and even gases by manipulating atoms and molecules. It results in culinary innovations, like these intriguing, yet edible, food products. 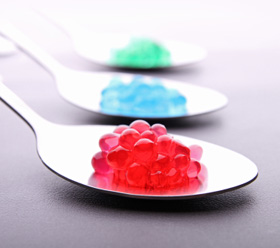 These look similar to caviar, but are far from the fish-scented delicacy you’re used to. Fruit caviar is tiny, round balls of fruit that pop in your mouth, releasing bright flavors of your favorite fruits. So how is it made? It starts with sodium alginate, a thickening and binding agent made from seaweed and found in everything from eggnog to Popsicles and gravies. When a miniscule amount is put into a liquid then added to a bowl of water containing calcium chloride, a reaction occurs and each drop forms a tight shell that looks and feels like caviar. 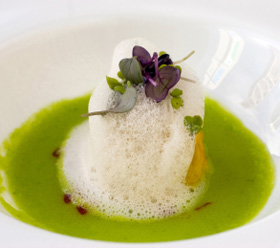 You know what foam is, but this is different. This foam is a food-flavored bubbly heap made from foods such as juice, soups, stocks or consommes. Foam is made by using lecithin, which is an emulsifier extracted from soybeans. The lecithin is mixed with your food of choice and blended together with an immersion blender.

Do you think food-flavored air would be satisfying? Would you try it or does it freak you out?