Food trucks are all the rage, but some of their unique (crazy?) menus have us scratching our heads. Would you sink your teeth into the Douche Burger? 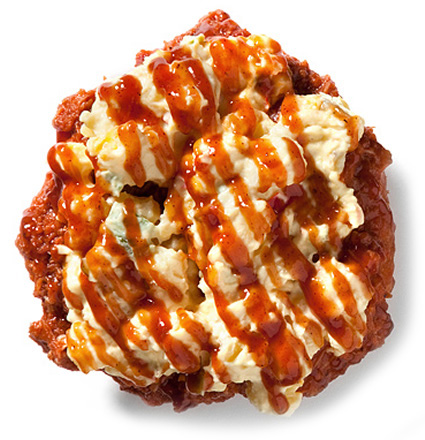 Food trucks are all the rage, but some of their unique (crazy?) menus have us scratching our heads. Would you sink your teeth into the Douche Burger?

When it comes to the success of food trucks, often the crazier the concept is, the longer the line will be. Along with a catchy name, that means coming up with a unique menu to get people talking. These food trucks have pulled no punches when it comes to adding a little something different to their menus. We’re not so sure about some of these options, but as the saying goes, don’t knock it until you’ve tried it. And who knows… maybe peanut butter, jelly, bacon and hot sauce really does taste great on a burger!

Check out the 10 best cities to get street food >> 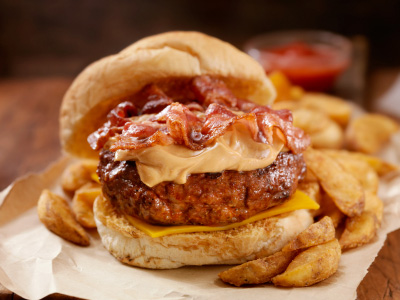 First things first — when discussing crazy food truck eats, the Douche Burger from 666 Burger in New York has to be at the top of the list. This burger, described as “being full of rich people stuff”, includes a Kobe beef patty topped with aged Gruyere cheese melted in champagne steam, then loaded with caviar, foie gras, lobster, truffles, gold leaf and more. To really put the icing on the cake, (er, burger?), the whole thing is wrapped in three one hundred dollar bills. The Douche Burger can be yours for the low price of $666. And no, we’re not kidding.

Several of the burgers from Grill ‘Em All in the Los Angeles area deserve a mention here, but the Dee Snider burger tops the list. Topped with peanut butter, jelly, bacon and Sriracha sauce, this 7-ounce burger could almost serve as breakfast. Is this a winning combination that we’ve all been missing out on? According to reviews of the Dee Snider, it tastes a lot better than it sounds. Another brow-raising burger from the Grill ‘Em All menu is the Witte burger, topped with cream cheese, deep fried bacon, beer, Sriracha onions and malt vinegar aioli. Did someone say deep fried bacon? 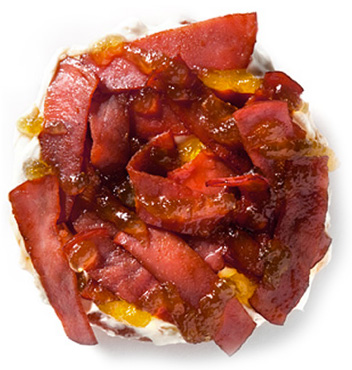 Gone are the days when doughnuts were best eaten with a hot cup of joe, simply coated in glaze or filled with jelly. Doughnuts are now being topped with just about anything you can think of, including savory cuisine.

At Gourdough’s Big. Fat. Donuts. in Austin, choices like Boss Hog, Porkey’s or Slow Burn probably pair better with a mug of beer than a cup of coffee. Although we’re no strangers to bacon on doughnuts, the Porkey’s doughnut kicks things up a notch with Canadian bacon, cream cheese and jalapeño jelly. Keeping with the pork theme, the Boss Hog doughnut comes topped with pulled pork and potato salad drizzled with honey barbecue sauce. For a vegetarian option, try the Slow Burn doughnut with cream cheese and habanero pepper jelly, which seems mild in comparison to the others, even if it is fiery hot.

How about a sandwich made with doughnut buns? That’s exactly what you’ll get at Dough Truck in San Francisco, which serves all its “dough sandwiches” on freshly baked glazed doughnuts. Their Chicken & Donut sandwich is billed as the new chicken and waffles, which we admit is a pretty tasty combination. Can doughnuts upstage the waffle? 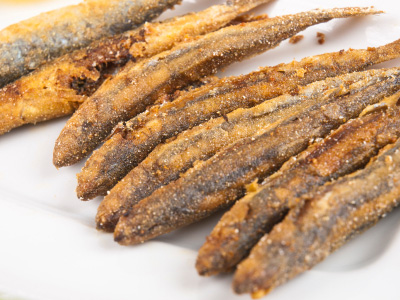 If you’re in the mood for street food, head to Eurotrash in Portland, where they serve the “tastiest, trashiest” European street food with an American spin. If listed separately, the ingredients of their sandwiches probably wouldn’t sound too unusual, but when put together they form a unique blend of textures and flavors. For instance, their Squid Fan sandwich combines fried, curried squid and spicy curry slaw on a toasted French baguette, but it packs quite a punch. Their Fishy Chips dish might sound pretty standard, except instead of cod or halibut, you get breaded and fried Spanish anchovies sprinkled with lemon and salt. And since this isn’t California, foie gras fans take note — you can get an order of foie gras atop a pile of Nah-Nah Chips, thinly sliced potatoes fried and tossed in garlic aioli (Eurotrash’s version of fries).

What’s the craziest item you’ve seen on a food truck menu? Share in the comments below!