Gnocchi — those plump, rich little potato pillows that melt in your mouth. But if you thought boiling them was the only way they could be prepared, get ready for a mouthwatering surprise. 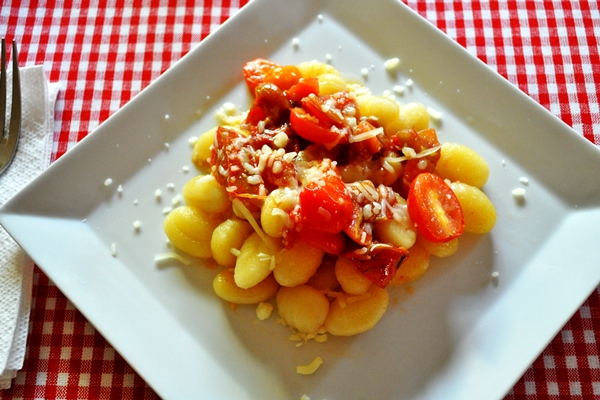 A few weeks ago I was watching the news and Michael Chiarello was preparing a gnocchi dish from one of his restaurants. But unlike so many pasta recipes I’ve seen and prepared, Michael wasn’t boiling his gnocchi; he was frying them. In butter no less. Although I don’t remember what the final dish was, I do remember thinking I want some fried gnocchi. Right now! Yes, it was 8 o’clock in the morning, but I still wanted it. Since I couldn’t get the gnocchi out of my mind, I finally decided to make my own. They were just as heavenly as I’d imagined. See, unlike boiled gnocchi which are soft all over, these now had a crispy outer shell, but were still soft pillows of potatoey goodness inside. Topped with a fresh tomato sauce, and I had a dinner that was out of this world.