Indian food has become very popular throughout the U.S., but you may be surprised to find very different food in India. Find out what’s authentic and what dishes are foreign inventions. 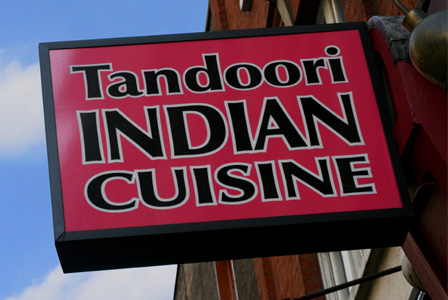 There are absolutely authentic elements to Indian food in America, but what’s important to keep in mind is that India is a vast country so what’s typical varies greatly from region to region. The most common Indian food in the U.S. comes from North India and is more specifically often Punjabi. Also a very large population of the subcontinent is vegetarian, so vegetable dishes are far more common. 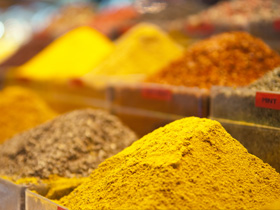 The most generic and catchall Indian dish, curry, is served in the U.S. with vegetables, chicken, lamb, shrimp or paneer. Curries are absolutely of Indian origin, but in India there is a lot more variation. Each area in India (and often each family!) has their own unique blend of spices to make up those that have become somewhat standardized in the U.S., like curry powder and garam masala. So you will find countless curries across India, but they may not taste quite like the American versions we’re used to and will likely be spicier. 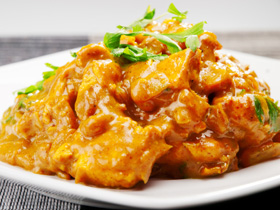 Probably the most popular Indian dish in America, it’s considered a national dish of Great Britain, if that gives you any clues as to its origin. Nobody knows exactly where it was invented, but one story claims that a British person was served chicken tikka (marinated chicken medallions cooked in a tandoor oven) and sent the dish back, demanding a gravy. The cook quickly concocted a sauce made with tomatoes and spices, and the Brit was pleased. Chicken tikka masala is served at some restaurants in India these days, but it’s more for tourists and rarely eaten in private homes.

Get the recipe for chicken tikka masala >> 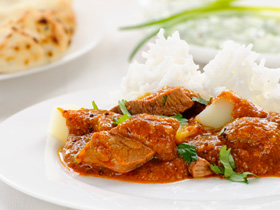 Vindaloo is one of the few Indian dishes popular across America that has its roots in the south of the country. It was invented in Goa as an adaptation of a Portuguese dish called “carne de vinha d’ alhos” (Goa was under Portuguese rule for some time), where wine is swapped for vinegar and Indian spices. Today it’s actually quite popular across the country and considered a celebratory dish. Restaurants in the U.S. often include potatoes in the dish, which is not authentic. 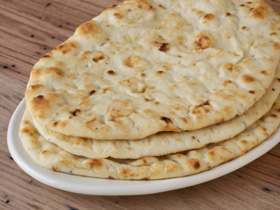 This fluffy flatbread, which is traditionally baked in a tandoori oven, is very similar in India and America. In America most people eat naan with every Indian meal. In India, on the other hand, it’s more common to make chapatis or rotis (flatbreads made on the stove) in the home.

Learn how to make naan on the grill >> 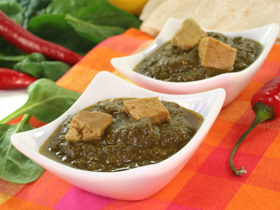 Also often called “saag paneer,” this bright green dish of paneer cubes simmered in pureed spinach sauce, is a popular vegetarian option in Indian restaurants in the U.S. It was likely concocted in a Maharaja’s kitchen some time in the late 19th century, and has been popular in North India and Pakistan ever since. While Indian renditions of this dish, which can also be made with mustard greens, are considered healthy, American versions often add cream to the sauce. 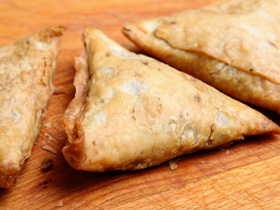 This popular fried, stuffed snack has been a favorite in India for centuries and is one of the more authentic options on Indian menus in the U.S. The typical filling of potatoes, peas and onions is common both in America and India, as is pairing it with chutney of any flavor. The meat-filled versions tend to be more common to Pakistan, where they are also a favorite nibble.