Rosh Hashana is the Jewish New Year and the first of the High Holy Days that occur in the early fall. Rosh Hashana is celebrated over two days and features numerous customs, including eating various symbolic foods. 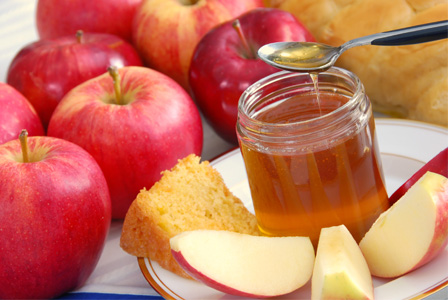 The most recognized foods associated with Rosh Hashana are apples and honey. In the Bible, Israel was often referred to as the land of milk and honey, and honey was a symbol of good living and wealth. On the first night of Rosh Hashana, it is customary to dip challah (braided egg braid) into honey and also dip apple slices into honey — saying a prayer for a sweet year.

Challah is an egg bread that is typically eaten by Jews on Shabbat, on special occasions and during holidays. Challah can be braided with just two strands of dough, or up to six. Challah is braided into round, oval or rectangular shapes. It can also be shaped into spirals, birds, books, keys and other symbols. On Rosh Hashana, challah is baked in braided rounds to symbolize the never ending cycle of life. At Rosh Hashana raisin, honey and other spices are often added to Challah to make it sweeter — representing a wish for a sweet new year.

Rosh Hashana can be translated to “head of the year” in Hebrew. Some Jewish households and communities eat the head of a fish (or lamb) during the Rosh Hashana meal in the hope that everyone will be at the “head” (not the tail) of whatever they are doing in the upcoming year. Fish is also a symbol of abundance and fertility.

Another sweet treat that represents sweet wishes for the New Year is honey cake. Many Jewish families serve honey spice cake. Often, these cakes are created from family recipes that have been handed down for generations.

On the second night of Rosh Hashana, it’s traditional to eat a “new fruit.” This should be a fruit that the participants haven’t tasted in a long time. While eating this fruit (which is often pomegranate or another exotic choice), families and friends say the “shehecheyanu” blessing, which thanks God for life, health and bringing everyone into the new season. Eating the new fruit is a reminder to appreciate the wonderful fruits of the earth and being alive to eat and enjoy them. Pomegranate is often chosen because its seeds can represent all the good deeds to be done in the new year.