Ever have one of those days where you just crave a certain food? And even after you’ve satisfied that craving, you find yourself wanting and needing more of it? If so, there’s a strong chance you may be addicted to that food, both physically and mentally. The 10 foods below are more than just delicious. In fact, they’re addictive! Take a look, are you facing a food addiction? 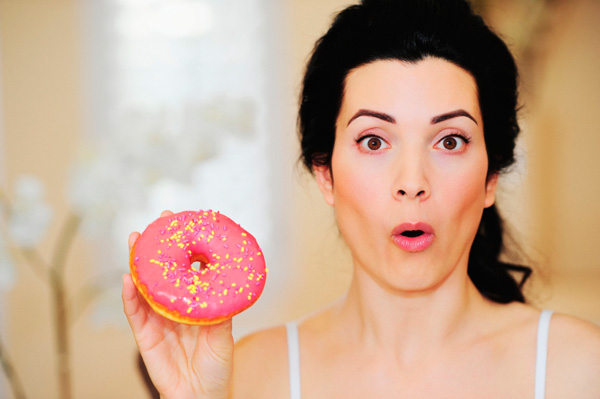 Do you go through withdrawal if you can’t get your chocolate or carb fix? Do you have difficulty limiting your portion size when it comes to these foods? Do visions of Hershey bars, croissants, chips and gum haunt your every thought? These may be signs of a food addiction! Which of these foods do you find yourself dependent on?

Ever find yourself getting irritated, anxious or fatigued if you don’t get your morning bagel, toast or cereal? Half of this is due to hunger and the other half could be a carbohydrate addiction! Eating carbs produces a natural high due to the release of dopamine. The feeling of gratification and euphoria, which is similar to the effect of cocaine, is often reported after eating a hefty serving of carbs.

Many low-fat, low-calorie and fat-free items often contain more empty calories, sugar and sodium than regular full-fat items and have less protein and fiber, which means you eat more of them to feel satisfied. Plus, the higher amount of sugar will make you crave more of the product. In addition, you are mentally more disposed to eat more of an item that is labeled low fat because you think it’s healthier for you, leading you to buy more of those items when shopping and eat more of them during snack and mealtime.

You know that eurphoric feeling you get when eating carbs? The same, cocaine-like high is also reported after people eat fast food! According to CNN, a study found that when rats were fed high-fat, high-calorie foods (like hamburgers, cheesecakes, etc.) it led to compulsive habits that resembled drug addiction. Because many of these foods are high in sugars, the pleasure centers crash, and you have to consume more of the item to feel the same high.

Ever notice just how quickly a pack of gum disappears after you buy it? It turns out the additives in gum, especially the varieties high in sugar, have been shown to ease anxiety, stress and discomfort. Another reason for its addictive quality may lie in the reason why you are chewing in the first place. If you are chewing so you don’t eat an unhealthy dish or smoke a cigarette, you’re using the gum as a placeholder for another addiction. To avoid jaw issues, chew slowly and avoid high-sugar brands.

According to TLC, fat increases the pleasure center in our brain, making us feel better as we eat it. Since many fatty foods are also high in sugar and sodium, we experience the same crash we do when eating junk food, making it harder for us to appease our cravings with the same amount. Another study using rats, by Scientific American, found that rats that who were given access to high-fat foods consumed 66 percent more calories than the rats that had access to generic rat food.

You know that Pringles slogan “once you pop you can’t stop?” They aren’t lying! Chips, pretzels and other salty snacks are high is sodium (salt) which is one of the most easily recognizable flavors in food. You crave salt in your food, snacks and recipes because it adds flavor. However, most people don’t know when to stop and end up overeating salty snacks or adding too much to their food. Too much salt forces our kidneys to work on overtime, leading to artery blockage and high blood pressure.

Do you add cheese to all of your dishes? Order extra cheese on your pizza? You’re not alone! When Dominos launched their 40 percent more cheese campaign in early 2010, their sales skyrocketed. So what is it about cheese that makes us crave it? A study done in the ’80s found traces of the opiate morphine in cow’s milk. But that’s not all. The super-addictive ingredient, casein, is prevalent in cheese. Casein releases casomorphins, which are a kind of protein that produce an opiate effect in the body during digestion.

Are you a chocoholic? Crave the sweet dessert when you’re stressed, tired or overwhelmed? Your reliance on chocolate may have something to do with its chemical compounds, including theobromine, phenyethylamine, anandamide and tryptophan. These compounds have a drug-like “pleasure-inducing” effect on the brain. Plus, the alkaloids in chocolate are also present in alcohol and are often linked to alcoholism.

Why are we drawn to foods loaded with this sweet, white stuff? When we consume sugar, our blood sugar levels rise (obviously). The rise in blood sugar causes the pancreas to release insulin, which converts this sugar into energy. Increased energy after eating certain foods encourages you to continue to eat those foods for the same desired effect. Unfortunately, excess insulin also leads to weight gain and obesity, so be careful how much you let this addiction control you.

One of the most addictive foods isn’t actually a food at all. In fact, it’s something found in many things we drink! Caffeine is a mild stimulant, so drinking beverages filled with it (like coffee and soda) will give you a boost of energy and a rush of insulin. The more caffeine you drink, the less effect the stimulant has on you, causing you to consume more. Ever wonder why you get withdrawal symptoms and headaches when you don’t have it? Caffeine blocks the brain receptors that dilate blood vessels, which cause headaches!

What food do you crave most? Share in the comments below!