Many have been celebrating what would have been Julia Child’s 100th birthday on Aug. 15. Join the celebration for the chef who brought French cooking to so many! 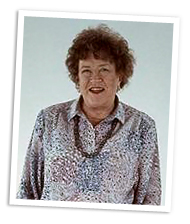 Many have been celebrating what would have been Julia Child’s 100th birthday on Aug. 15. Join the celebration for the chef who brought French cooking to so many!

Starting in the early 1960s with The French Chef, Julia Child hosted several cooking shows delivered to the American public via PBS, decades before we were able to watch our favorite chefs and cooking shows on cable TV, nearly 24/7.

Try this recipe for chicken ratatouille >>

For those who may not know, Julia Child was an American chef who brought classic French cooking to amateur home cooks. She had a distinctive voice and a tall stature that made here stand out, but her attention to detail and her easygoing TV personality made her beloved to many.

Julia studied cooking in France at the Cordon Bleu and later started a cooking school in Paris in the 1950s with a few partners. They then wrote the famed cookbook, Mastering the Art of French Cooking. Through her many TV shows, cookbooks and even newspaper columns, the award-winning chef was able to help many transcend the seemingly impossible — to create French meals at home.

Participate in the fun through JC100

If you’re tuned into social media, check out what the famed chef’s longtime publisher, Alfred A. Knopf, has started by searching for JC100. You’ll find all sorts of Julia Child tributes, info and her beloved recipes.

If you’ve never tried a French recipe, there’s no better time than now! Join the fun of cooking a classic Julia Child recipe. Cook your own versions of your favorite recipes and share them online. Check out some of the ways you can participate in the celebration of cooking, food and Julia Child:

If you need a few ideas to get you started, try one of these famous Julia Child recipes:

58 mins ago
by Justina Huddleston