Adam Richman clearly knows food and travel, but now he’s focused his attention on sandwiches. Read on to find out what he has to say about these subjects and more. 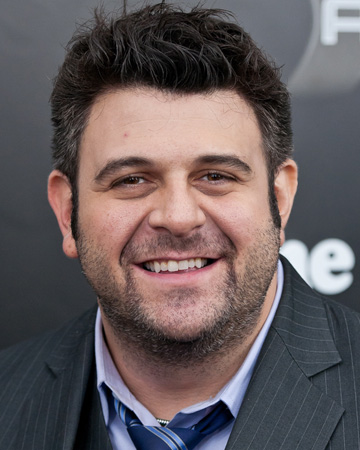 We’ve all seen Adam Richman conquer insane portions and crazy concoctions on Man v. Food, but his new endeavor is all about sandwiches. His Travel Channel show, Adam Richman’s Best Sandwich in America, documents his search to find “the best thing since sliced bread on sliced bread.” SheKnows recently had a chance to get Richman’s take on all things food and travel.

With his new show, Adam Richman’s Best Sandwich in America, Richman is happy to have a reprieve from the portions he ate while filming Man v. Food. Even though some of the sandwiches he eats are big, “they’re not even in the same ballpark as the Man v. Food challenges,” he says.

Of the show’s concept, where Richman seeks out the best sandwich from regions across America, he says, “Every culture has a sandwich; every income bracket has a sandwich; it just seemed to be the most universal food element for a show… a primary language that we all speak.”

As he works his way across the country, Richman scores each sandwich he eats according to his “B.I.T.E. Scale,” rating the bread, interior, taste and eating experience. What does he look for in a sandwich? He says it’s a lot of things: bread that can contain some of the juiciness of the sandwich without getting soggy; a variety of textures, tastes and influences; a broad spectrum of flavor; and originality, to name a few. Richman says the new and trendy sandwiches won’t necessarily beat out the classics. “It’s all about the execution. You could make a tuna melt better than some new fancy sandwich, but just because your craftsmanship is better, it’s a better sandwich,” he says.

Are you in the mood for a sandwich now? Try these delicious sandwich recipes >>

A native New Yorker, Adam Richman doesn’t hesitate when asked about his favorite city to eat in. But outside of New York, he says that he’s partial to many different cities for different reasons. “Chicago is the most cosmopolitan but has a strong Midwest angle, with great produce and great livestock. San Francisco has all the different Pacific Rim influences combined with all the Northern California seasonal vegetables and great wine. And Austin, since it’s the center of Texas, gets influence from all over the state; it’s a progressively minded and adventurous dining scene.” How does he remember all this about each city he visits? Richman has been keeping a food journal since 1995. “I realized that I was writing very much about my life just using food as a point of departure,” he says.

You can’t talk to Adam Richman without asking what his most memorable meal was, but his answer may surprise. As someone who has likely eaten it all, he says that a great steak from Marquee Grill in Dallas ranks right up there as most memorable. “It was just great beef, perfectly prepared, great flavors and just the essence of what it is to make and eat a great steak,” Richman says, showing there really is something to be said for simplicity in food when quality ingredients and techniques are used.

Learn how to cook the perfect steak >>

An active social media user, Richman says that while Twitter and Facebook are a great resource for travel tips and recommendations, guidebooks also come in handy. Where guidebooks need to be edited over and over again, “social media is very immediate, it happens in real time,” he says. But while traveling in Thailand, he used a guidebook almost exclusively. Richman says it all depends on where you are. “It’s about creating a synthesis between what you like about what Twitter is saying, what Facebook is saying and what your guidebook is saying and then drawing your own conclusions.”

Where does someone who travels for a living go on vacation? Richman heads to Hawaii for a little rest and relaxation. He says he goes as often as he can, specifically to the island of Oahu, which has a balance between city and country. “I love the people, I love the vibe, I love the history, I even love the kitsch 1950s cheesy Hawaii,” he says. Pair all that with Hawaii’s great food, and you’ve got the ultimate vacation spot.

Check out this guide to see the islands on a budget >>

Travel tips from a pro

Richman estimates that he travels at least 250 days out of the year. With that much time on the road, he’s sure to have some great travel advice. He says that the first thing he likes to do when he gets to a new city is to just go for a walk; find street fairs and outdoor vendors or a body of water to walk along and get a feel for things. He also recommends seeking out the local culture. “I like to get to a local coffee shop, a local book store, a local music store, a local clothing store, because other than the fact that these are the passions that drive me and things that I enjoy buying, the people that frequent those shops tend to have a good understanding of that city and the things that I might be interested in,” Richman says.

And what is Adam Richman’s number one tip for traveling to a new place? He says to make sure you write everything down, keep a journal and take as many photos as you can. “Keeping a chronicle of your travels is essential,” he says.

Watch Adam Richman’s Best Sandwich in America every Wednesday at 9 p.m. Eastern on the Travel Channel.

What is your favorite sandwich? Share in the comments below!

20 hrs ago
by Kelsey Mulvey