We’ve all ruined a perfectly good bowl of cereal with a sour milk bath, or found a container of leftovers covered in mold in the back of the refrigerator. At times, the fridge can seem like a scary place full of items we’re not sure we can eat. 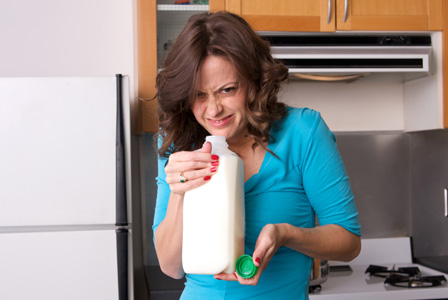 While dates are a good indicator of a food’s freshness, they’re not the only one. Some foods can be eaten past the date, while others probably shouldn’t be. Read on to find out what you should keep and what you should toss.

Make an informed decision next time you clean out your fridge using these guidelines.

Most foods don’t actually have “expiration” dates. There are several terms used when dating packages, such as “sell by” and “best if used by,” which are different from expiration dates. These dates are more for the grocery stores than for us, as they pull items from shelves according to these numbers. Although the freshness and quality of the food may suffer a bit once past these dates, it is still safe to eat. But don’t push these dates too far — items should be used soon after. For milk, use within a week of the sell-by date. Use fresh poultry and seafood within a day, and use beef within three to five days.

Learn how long eggs stay good in the refrigerator >>

Whether the date on food has passed or not, it’s also a good idea to check for other signs that it might be spoiled.

Does it taste bad?

Even if your food has passed all the other tests, if you taste it and it doesn’t seem right, throw it out!

If you answered yes to these questions, be safe and toss it! Not only will your stomach thank you, but the fresh replacements will taste a lot better.

Do you rely only on dates for food freshness, or do you use other indicators? Share in the comments below!