Warmer nights have us thinking of fish for dinner. Whether you’re ordering off a menu or buying raw fillets to cook at home, choosing sustainably raised and caught fish is as important as deciding how to prepare it. (But we’ve got that covered, too: Check out the recipe below for salmon with honey mustard dill glaze.) 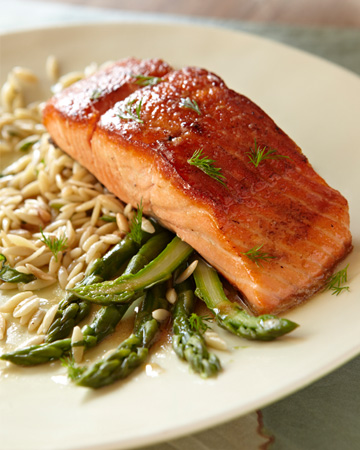 Seafood that is sustainable has been harvested without hurting its population and without damaging the environment and other marine life. Here’s how to shop for sustainable fish:

Swim against the current

The overfishing of bluefin tuna and Chilean sea bass to meet consumer demand has nearly depleted these species. Instead of buying the hot fish of the moment, get to know a few delicious alternatives that aren’t heavily sought after.

Hawaiian opah, for example, is not targeted by fishermen, but this premium variety likes to bite anyways, says Wayne Samiere, a marine biologist and the founder and CEO of Honolulu Fish Company.

“Boats don’t go out and try to fish for this,” he says. “There’s no pressure on the population by eating a nontargeted fish. You’re selecting a fish that is sustainable and under-harvested.”

Samiere’s company supplies more than 30 varieties of wild-caught Pacific water fish to chefs including Jean-Georges Vongerichten, Michael Symon and Tom Colicchio. While fishermen are casting their lines for Honolulu Fish Company’s most popular fish — ahi tuna — they are bound to hook other varieties at the same time, Samiere says.

Check out this recipe for ahi tuna tostada >>

Look and listen for sustainable clues

Seafood Watch, an arm of the Monterey Bay Aquarium, offers a thorough online guide and mobile apps that help consumers select sustainable seafood. So, when you’re curious about, say, halibut, you’re just seconds away from learning that wild-caught halibut from the Atlantic Ocean has an “avoid” rating from Seafood Watch because of overfishing, while Pacific wild-caught halibut has a “best choice” rating.

At supermarkets, keep an eye out for the blue Marine Stewardship Council label that signals that the seafood is from a certified sustainable fishery.

The farming of fish in a controlled environment is known as aquaculture, and though it might sound a little, er, fishy, it is an increasingly popular way to raise seafood. Samiere, of the Honolulu Fish Company, calls aquaculture farming “the future of fisheries.” But not all farmed fish is created equal.

Farmed salmon, also known as Atlantic salmon, has an “avoid” rating from Seafood Watch. In addition to environmental and health concerns, the resources that go into farming salmon outweigh the results — roughly eight pounds of feed fish are needed to make one pound of salmon, Samiere points out. Choose wild-caught salmon instead.

Meanwhile, tilapia farmed in the U.S. has a “best choice” rating from Seafood Watch, meaning it’s farmed in an ecologically responsible way.

Recipe from the Honolulu Fish Company