We at SheKnows are quite fond of our libations. From Easter candy martinis to boozy milkshakes, we love trying new and delicious cocktail creations. 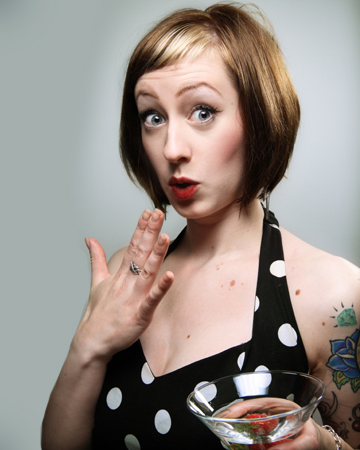 However, we have to draw the line somewhere and that line might be smoked salmon vodka or, gag, pickle-flavored vodka. These weird, flavored vodkas, along with eight others, make our list of the 10 strangest liquor and beer flavors.

Although some of these sound downright gag-worthy (need we say pickle-flavored vodka, again?), some sound pretty tasty, like peanut butter and jelly or cake! Check out these strange liquors and tell us what you think. Gross or good?

Although it’s still a little strange, this vodka flavor was a long time coming. Made from the people who also make cherry vodka (Three Olives), this vodka tastes just like a big piece of Double Bubble. If you find yourself feeling a little nostalgic for the days of your bubble gum chewing youth, try out a bubble martini. The taste is light and refreshing, so it’s the perfect cocktail for summer. Just don’t try to blow a bubble with it; it won’t end well.

Whomever came up with this idea is a bit of a genius. Who doesn’t love a traditional peanut butter and jelly sandwich? Turn your favorite childhood lunchbox sandwich into a happy hour libation with this deliciously strange vodka created by Van Gogh. Since you can’t very well serve vodka between two pieces of bread, try mixing it with milk for an updated white Russian!

This sounds too good to be true! Cake, in drink form? Could it be? The makers of Pinnacle vodka, who first coined the whipped cream flavored vodka, turned your favorite dessert into something you can drink. For your next adult birthday party, skip the actual cake and serve up birthday cake martinis instead. Just don’t light a candle near your drink if you want to keep your eyebrows.

Cotton candy is another whimsical, strange and innovative flavor to come out of Pinnacle. Unlike the light as air, fluffy cotton candy you buy for your family at the local fair or theme park, this cotton candy isn’t meant for kids. Pair this super sweet flavored vodka with some club soda for a cotton candy club or, if you’re feeling really brave (or had an exceptionally bad week) with tequila for a strange, interesting margarita.

Yep, you read that read, there’s a liquor that tastes like yogurt. However, sadly for U.S. residents, Yoguritio is really only sold in Japan. This tangy and creamy liqueur is made in Holland and is a hit among Japan’s health-conscious population. Mix with some pineapple or cherry juice and it’s like you’re eating a fruit on the bottom yogurt cup. However, don’t be fooled. Just because it tastes like yogurt doesn’t mean it’s yogurt, so don’t go switching out your morning Chobani for liqueur. Unless you’re on vacation, then in that case, all bets are off.

Hemp seeds? In a drink? The Alaska Distillery is the first one ever to create a spirit with hemp seeds. Hemp is a low strain variety of the cannabis sativa plant. A higher THC strain of this plant that you may have heard of is called marijuana. However, don’t think a sip of this will get you high, man. The distillery uses sterilized hemp seeds with no THC. This drink, ironically and symbolically named Purgatory, is a great addition to your 4-20 celebration.

And Pinnacle makes the list, again! This strange, yet incredibly intriguing flavor of vodka could go either way for us. On one hand, the only reason we make cookies is so we can sample some of the dough. On the other, though, we’ve all felt the wrath in our stomachs of too much cookie dough and the outcome ain’t pretty. In moderation, this could be a delicious addition to a chocolate martini or vanilla ice cream (right?), however, too much could have us reliving those not-so-glorious days of our youth when we had just a little too much raw egg and chocolate chips.

There’s nothing better than a cold beer with your pizza, right? After a long work day, you pop open your favorite brewed bottle and sit down to a piping hot pizza from Papa Johns. As good as these two are paired next to each other, we’re not so sure they would taste as great if they, you know, mated. However, Tom and Athena Seefurth, who created this Illinois-based brew swear by it. Made the same way you make pizza, except strained, filtered and steeped, each sip tastes like a bite of pie. Forget ordering out, just drink your pizza for dinner tonight instead.

This is easily one of the weirdest flavors of vodka to ever be invented. Created by the same people who made the hemp seed spirit, it’s for those of us who can’t get enough of that smoked salmon taste. So, we beg the question, does it actually taste like fish? Laurie Constantino, a food writer and blogger, tested this out so we didn’t have to (thanks Laurie!) and says the dominant flavor is smoke, but there’s a slight aftertaste of salmon. It’s not a drink to sip on its own but would make a great addition to a bloody mary.

We have a tie for the weirdest flavor vodka because it was just too hard to pick between these two, bacon-flavored vodka and pickle-flavored vodka. Bacon vodka, created by Seattle’s Black Rock spirits has the peppery, cured, meaty and crispy flavor you know and love from cooked bacon, just in a drink form. This is not a sipping vodka (unless you really, really love bacon) but we hear it’s delicious in a bloody mary and in vodka sauce! Pickle-flavored vodka, or Snooki’s dream come true, tastes like a pickle, simple as that. Another vodka you wouldn’t just sip, it could be mixed in a bloody mary. We don’t know about you, but the thought of drinking spiked pickle juice makes us want to throw up.