Sometimes, a girl just needs an adults-only vacation away from family, responsibilities and job. A vacation where her only worry is exactly when and where she’s going to get her next drink. 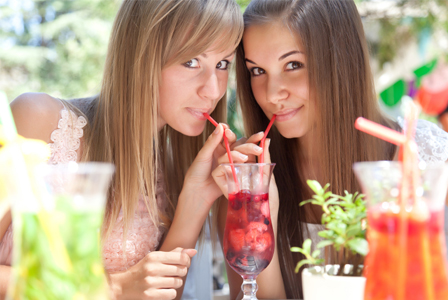 Whether you’re going for a few days or just stopping on the way through, you’ll be sure to have a great time in one of these well-known drinking cities. Just be sure to keep it classy, OK? We’re a bunch of upstanding, elegant ladies here at SheKnows.

This college town is known for more than their cold winters and football team. It’s just a short trip away from Leinenkugel’s Brewery! Known best for their Sunset Wheat, Leinenkugel’s has six other beers that they brew as well in their Chippewa Falls brewery. Milwaukee also has a bar on every corner (according to one local). If you’re in the mood for a laid-back pub atmosphere and a beer, check out Mulligans Irish Pub & Grill, located on 27th Street in Franklin, a suburb of the city. Voted the best bar in the city by the Express, Mulligans has great prices on beer, good food and a great happy hour. For a more upscale, elegant dining experience, check out Metro Lounge on Mason Street. They serve the best $5 martinis in the city (according to the Express) and have great, modern and sleek decor.

This small town, nestled just an hour outside our nation’s capital, was voted the No. 4 place to live in the U.S. by CNN and Money magazine and, with as many wineries located near it as Napa, it’s not hard to see why! Leesburg and the surrounding area have more than 20 wineries within a 25-mile radius. If you’re looking for a winery with views, check out Lost Creek. They do wine tastings Thursday through Monday and have a private room you can rent for special occasions. For just $7, you get to taste every wine they make! Another popular winery that has gorgeous field and vineyard views is Hidden Brook Winery. They have a range of wines, including four reds, three whites and three dessert wines, all of which you can taste every day of the week for just $7!

Check out these other amazing wine country destinations outside of California>>

Who knew the Windy City was known for drinking? Voted the sixth “drunkest” city in the U.S. by The Daily Beast, this city definitely sees its fair share of happy hours. According to a poll, the average number of drinks per person a month is 15.5! For an upscale martini and adult conversation, check out The Aviary, a new cocktail lounge on Fulton Market. Voted the best new lounge by Chicago magazine, this beautifully decorated bar has twists on old classics, like In The Rocks. If you’re in the mood for a more laid-back atmosphere, check out Community Bar, a newly renovated dive on W. 31st Street. This bar has an amazing selection of craft beer — like 400 options amazing.

Voted one of the best cities for foodies in the country, San Francisco is also a top destination for those who love the occasional drink. Not only is San Francisco just an hour south of Napa Valley, it’s also known for its eclectic bar scene with places ranging from dives to five-star restaurants to themed dance clubs. If you’re looking for a great happy hour, check out Dr. Teeth and the Electric Mayhem (we told you eclectic). This bar was voted the best happy hour spot in San Fran, so you can expect great prices and a ton of hipsters. If you’re looking for a great selection of wine, check out Uva Enoteca, voted one of the best wine bars in the city. In addition to wine, they have a great food selection, too.

Learn how you can taste the best of San Francisco coffee>>

They’re making more than just coffee in this trendy, Washington town. Seattle was once ranked as having the highest beer consumption in the U.S., and with the number of local microbreweries the town offers, that’s definitely no surprise. For an authentic taste of the Northwest’s finest brews, visit the popular Pike Brewing Company. You can visit the brewery and see how the beer is made or just grab a pint of their best and sit in the pub. For a more trendy, expensive drink, visit Naga Cocktail Bar in Bellevue. Voted one of the best places to get a drink by Seattle Met, this place has some great specialty drinks, like the Brazilian Grog.

New York City has hundreds of bars ranging from dives to super exclusive and has a vibe and drink for just about everybody in the world. So how on earth can you decide which place to go? Here, let us help you. Check out the ultra-trendy Silver Lining on Murray Street near West Broadway. Voted the best cocktail bar in the city by New York magazine, this lounge plays classic jazz music, which fits the swing-era vibe of the decor perfectly. Plus, with more than 100 seats available, it’s not crammed like many of Tribeca’s other bars. Now that the weather is finally warming up, grab a seat and drink outside at Crown Victoria, named the best outdoor bar by New York magazine this year. The vibe is casual and there’s ping pong tables, bocce courts and even movie nights at the bar’s more than 1,000 square feet of outdoor space.

This one should be a no-brainer since it’s the home of the University of Arizona, one of the biggest “party” schools in the country. However, this desert city isn’t just for the frat boys or binge drinkers; you can still get a drink and stay classy in Tucson. If you’re looking for a more college experience, check out The Buffet, labeled one of the best dive bars in the country by Esquire magazine. They have Coors on tap and a working juke box, what more could you want? If you want more hip, check out Sky Bar or Level, which have a more upscale vibe and menu.

Sonoma is easily one of the best places to drink in the U.S., that is, if you like wine! Situated right in the Napa Valley, this area has some of the best vineyards in the world, including Cakebread , Korbel and Robert Mondavi! These wineries are also pretty close together, so you can easily rent a limo or shuttle to take you to a few of them and not have to worry about driving! To get the full experience of all Sonoma has to offer, book a trip on the Sonoma Valley Wine Trolley, where you visit four boutique wineries, have a picnic and get to taste on the trolley!

Check out why Sonoma is so romantic for couples >>

Don’t let the rowdy Red Sox fans keep you away from this drinking (and historically beautiful) town; there’s plenty of room for everyone. This city was voted the Drunkest City in America by The Daily Beast. However, don’t let that title scare you away, this city is full of low-key dive bars, upscale lounges and laid-back terraces where you can have a drink without having one poured on you. For the best drink in this best drinking city, you can’t go wrong with a bar named Drink, aren’t we right? Drink, which is located near the waterfront, is one of the best bars in the city, according to many locals on Yelp. Drink not only serves great cocktails and has great prices on their beers; they also make their own ginger-beer. For something a little fancier, check out Pigelle for the much-raved-about Aviation cocktail, which got its own spread in Boston magazine!

Go for the arch, stay for the drinks! St. Louis is a bustling midwestern city with an expanding scene of popular drink spots, including wine bars, microbreweries and fancy cocktail lounges. So when you’re visiting the STL, where can you go for these libations? Check out DeMun Oyster Bar in Clayton (just outside STL) for a laid-back, comfortable atmosphere with some killer oysters and custom-made cocktails. Looking for something a little more vintage with a dash of exclusion? Visit Thaxton Speakeasy, which is only open the weekends and you have to find its back alley door to get in. The clandestine cocktails are worth the trek to find it!