Zucchini and endive are unusual choices for a risotto. But when coupled with flank steak and grana padano cheese, the resulting risotto is rich and flavorful. 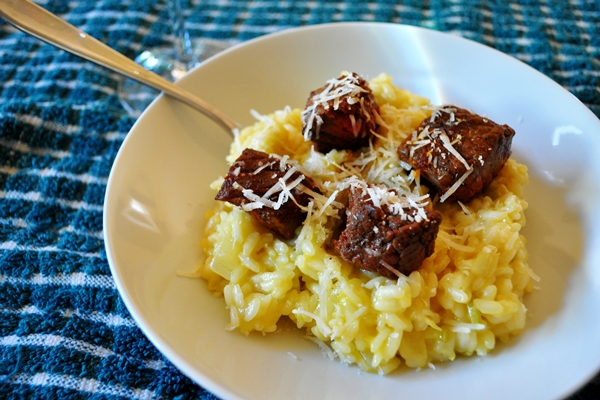 In the course of writing this column, I have done several risotto recipes. Some have included shellfish, some have included citrus, and there was one that even used red wine instead of white. But I’ve never made a green risotto because I’ve never used zucchini or endive. And I’ve never used zucchini or endive because they’re not vegetables I like. But the idea of a green risotto covered in cheese and meat intrigued me so much, I was willing to forgo my distaste of these two veggies. I’m so happy I did. The resulting entree from La Cucina Italiana was not only cheesy, meaty deliciousness, the two vegetables of which I am not a fan added a depth of flavor I did not expect. Yes, as with all risottos this one does take time to make, but the end result is well worth the extra effort.