If there’s one thing that’s true of almost every American, it’s that we love to eat. For many people, food isn’t just a source of nourishment. It’s an obsession, a passion, even a career. If you’re one of these self-proclaimed foodies with a serious appetite, you’re not satisfied by a simple hamburger or chicken nugget meal when you’re traveling. Instead, satisfy your desire for new, exciting food and love for travel by checking out these five food-fabulous US cities! 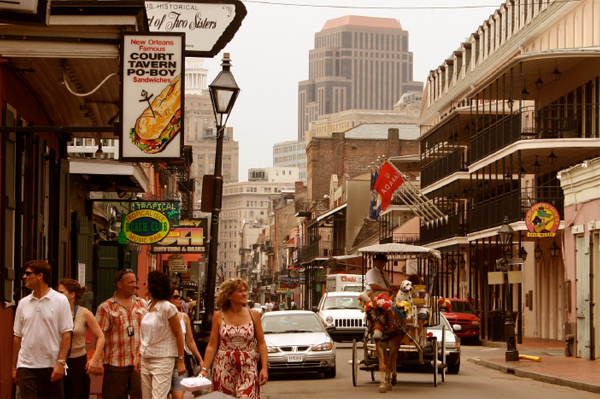 New Orleans, San Francisco, New York City, Portland, Ore., and Austin, Texas, aren’t just great for the sights and views. They are amazing places to get your grub on! So grab your fork and dig into the delicious delicacies each has to offer!

When you’re talking about amazing cities to eat in, there’s a good chance NOLA is at the top of your list. Sure this city is known for its wild parties, Creole and Cajun flair, and you know, Mardi Gras, but it’s also revered as one of the top cities in the country for amazing eats. According to a poll done by Travel and Leisure magazine, New Orleans won their survey on best neighborhood grills and also came in No. 2 for offering the best ethnic fare. This city has been through a lot since Hurricane Katrina, but the food scene is taking the country by storm.

So where are the best places to eat when you’re trying to sober up, er, enjoy the tastes and scenery? You can’t make it to the Crescent City without stopping at Café Du Monde for a beignet and cup of coffee. If you’re in the mood for some fancy dining, check out Antoine‘s, which has been around since 1840 and serves the best French-Creole cooking. For more casual fare and environment, visit the Palace Café on Canal Street for classic, yet unique dishes, like alligator gumbo!

Check out these travel inspirations from New Orleans>>

This city is the one that practically invented the term “foodie” so you won’t be short on amazing places to eat when you travel across the Golden Gate Bridge. What you’ll find in the Bay Area when it comes to food is more sustainable, organic and healthy options as well as delicious seasonal dishes. In addition, San Francisco has an amazing food truck scene, which can be followed by checking out Off the Grid. In Travel and Leisure’s survey, San Francisco scored a five for availability of fresh farmers markets and coffee bars!

In a city with so many options, it’s hard to choose the best place to go. So check out the San Francisco Eater’s blog, which has the top 38 restaurants to check out while you’re in the Bay Area. However, as touristy as it is, you can’t leave the city without checking out historic Fisherman’s Wharf.

Jay-Z wasn’t lying when he said this is the city where dreams are made. This is especially true for those of us who love to eat amazing food. Sure, there are tons of high-end, five-star luxury restaurants, but the great thing about NYC is the fact that you can eat well on any budget! NYC has fully embraced the food trucks and smaller casual dining spots that both tourists and locals flock to. Plus, you can always find great ethnic food at all hours, so you’ll never be hungry in the city that never sleeps, even at 4 a.m.!

If you’re feeling fancy after your Broadway show and want to splurge, go to Le Bernadin. You may have heard of this restaurant if you’re a fan of Anthony Bourdain, but this incredible French restaurant is known as one of the best restaurants in the world. If you’re looking for something a little less pricy and more ethnic, check out Bi Lokma, which was top-rated by New York Magazine. For a complete list of great restaurants, check out New York Magazine!

Check out how you can vacation like a celebrity in NYC>>

When you think of the best foodie cities in the U.S., Portland is probably not the first or second that comes to mind. However, this super-green city is one to be reckoned with when it comes to amazing, farm-to-table, organic food. Plus, with more than 200 food trucks and an extensive selection of micro-brews, this young and vibrant city is hip to new trends. Since no one can eat healthfully all the time, they are also home to one of the best doughnut shops in the country, VooDoo Doughnuts, where they have perfected the maple bacon doughnut.

After your sugar coma, where can you go for some tasty eats? Check out Screen Door Restaurant if you’re in the mood for some tried-and-true Southern classics with a Northwestern spin. Another great place with an incredible dessert menu is Paley’s Place, which features dishes like a caramel walnut tart and lemon semolina cake. For a complete list, check out Portland Food and Drink!

Not only is Austin one of the best cities for foodies, it’s also one of the best cities to visit, period! Full of Texas charm, an incredible music scene and some of the best barbecue in the country, this city has something for everyone. But don’t think brisket and short ribs are all you can find in this foodie mecca. Austin also boasts amazing Tex-Mex fare, as well as great Japanese restaurants, like Uchi. You can also find a great food truck scene and local picnic-style eateries like Tacodeli.

Where can you find the best food in Austin? For incredible and authentic Japanese food, you have to check out Uchiko, which is where the latest Top Chef, Paul Qui, cooks. For some truly mind-blowing barbecue, check out the top Zagat rated Franklin Barbecue on East 11th.

With summer just around the corner, it’s time to listen to your belly and plan the foodie vacation of a lifetime, no passport required!

Where to eat while on vacation
A foodie tour of Toronto
Culinary vacations: A treat for your taste buds