Do we really need pizza stuffed and topped with cheeseburgers, hot dogs and chicken strips? Although it’s hard to imagine the caloric impact of a concoction like this, it’s not stopping Pizza Hut from offering an assortment of fast food laden pies. 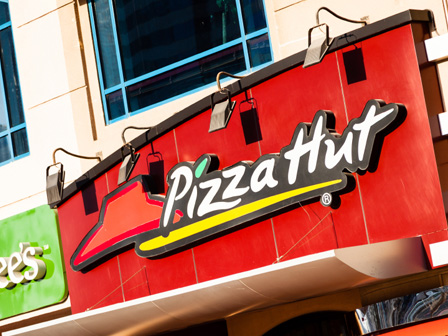 We all have those days when we can’t decide what to eat, going back and forth between menu options. Pizza sounds good, but you’re also craving a cheeseburger, and a hot dog would hit the spot too. Well, look no further: Pizza Hut has you covered.

Pizza Hut Middle East recently debuted their Crown Crust Carnival pizzas, promising “the most royal pizza ever!” Can you picture the Queen eating a cheeseburger stuffed pizza? Me either. But these pizzas are stuffed with about a dozen cheeseburgers in the crust, not to mention special sauce and more meat on top. And just in case chicken is more to your liking, they’ve got a pizza for you too. It’s packed with as many chicken strips as possible, accompanied by barbecue sauce and green peppers. If you need to see it to believe it, take a close-up look at the photos at Serious Eats.

This isn’t Pizza Hut Middle East’s first go at Crown Crust pizzas – a meatball and cream cheese stuffed pizza made its appearance in 2010, where the intention was to smear the cream cheese all over the pizza. I’ll leave my cream cheese for my bagels.

Too much of a good thing?

It might be surprising that Pizza Hut U.K., not U.S., is offering a hot dog stuffed pizza. While hot dogs are the quintessential American food, we definitely have a love/hate relationship with them. We eat hot dogs with fervor, but we don’t like to think about what‘s in them and how bad they might be for us. But stuffed into pizza? These are two foods that should remain separate in my opinion.

With all the gourmet pizzerias around, it’s hard to imagine choosing a pizza riddled with junk food. Would you eat one of these fast food stuffed pizzas?