Heart Attack Grill lives up to its name again this week when a woman collapsed in their Las Vegas restaurant. This marks the second person to fall victim to their horrifically caloric food in less than a year. 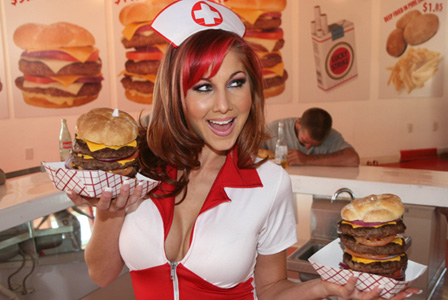 We told you so

We hate to say I told you so, but we told you so, more than once. A woman in her 40s collapsed while dining on the restaurant’s Triple Bypass Burger this week. She was also smoking a cigarette and drinking a margarita. There’s nothing like a little biological karma to get you to start taking care of yourself. The woman is currently recovering.

This comes just two months after a man collapsed in the location and just a year after their 29-year old spokesperson died. The spokesman weighed in at 575 pounds.

Read about the last man who collapsed at Heart Attack Grill >>

Owner Jon Basso prides himself on being honest and having clear warnings posted all over the restaurant. In an interview with the LA Times, he said “We attract an avant-garde clientele — thrill seekers, risk takers.” He says the woman got exactly what she asked for, but he wishes her a full recovery. 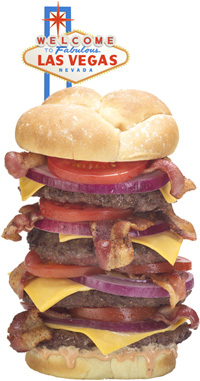 Eat at your own risk

Business is still booming for the admittedly unhealthy restaurant despite the negative press associated with the establishment. In a restaurant where the owner is dressed as a cardiologist and the menu items are named after serious medical conditions, it seems as if the warnings are more than just a pun. If you value your health, you may want to think twice before dining on 10,000 calorie burgers.

If risk taking is what you are craving, we suggest sky diving or swimming with sharks. In fact, even running in traffic might be better for your health. But if massive coronary failure is on your bucket list, by all means stop in for a burger and don’t forget to order the fries that are cooked in pure lard.

Want to be risky? Add some hot sauce to this veggie burger recipe >>

Free kid’s meal at Olive Garden on April 26
Is sugar toxic?
Will food with GMOs get special labels?