A healthy lifestyle can keep you feeling great. You eat fruits and vegetables, cut back on fatty foods, drink plenty of water and exercise when you can. But if you’re still consuming sugar, you could be hurting your health more than you know. 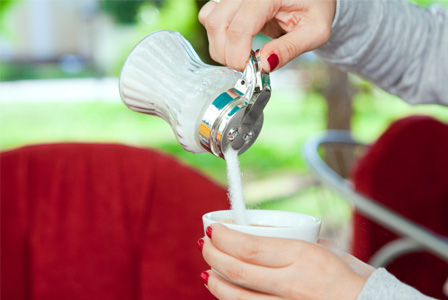 CBS News recently aired a report on 60 Minutes about the dangers of high sugar consumption in the American diet. Dr. Robert Lustig spoke with Dr. Sanjay Gupta about his view on how sugar, which he likens to a toxin, is killing Americans. He blames sugar for contributing to deadly diseases like obesity, Type 2 diabetes, hypertension and heart disease, and says that 75 percent of it is preventable by reducing the sweetener in any form from your diet.

Learn how to bake sugar-free with this banana bread recipe >>

According to Dr. Lustig, all sugar is the same. High fructose corn syrup is no worse than table sugar. “They’re both equally toxic,” he says. Another surprise is that sugar may be hiding in foods you wouldn’t necessarily expect it, like breads, yogurt and even peanut butter.

Read more on how to cut sugar without cutting taste >>

The war on sugar

Dr. Lustig has been waging a war against sugar for years, and his lecture on YouTube, Sugar: The Bitter Truth, has received more than 2 million views. With Americans consuming 130 pounds of sugar per year, he says we are in a public health crisis. Adding to the problem is that the brain reacts to sugar as it does with drugs or alcohol, giving you a euphoric feeling by releasing dopamine, a chemical that controls the brain’s pleasure center. In effect, we become addicted to this feeling, and like with other drugs, begin to feel the need for more.

More on sugar and your health