Spring is a great time to try new things — like new versions of cocktail classics. Get together with your best gal pals and try these tart and tangy grapefruit margaritas. 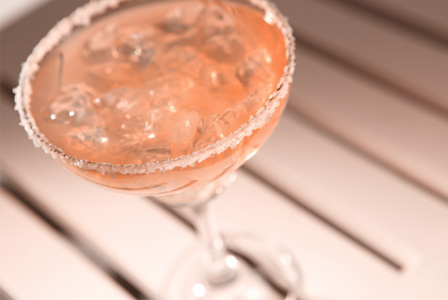 The origin of the modern margarita is a hotly debated topic (well, at least among those who lay claim to its origination). Mexican bartender Don Carlos Orozco claims to have invented it while experimenting with new drinks on a slow afternoon. He claims to have named it after Margarita Henkel, daughter of a German ambassador, who was the first woman to taste it. Another Mexican legend states that it was firt created at the Rancho la Gloria Hotel by Carlos Herrera, who first made the drink for former Ziegfried dancer Marjorie King.

Texas bartender Santos Cruz also wants in on the action. He claims to have invented in 1948 for singer Peggy Lee. Of course, the margarita is also very similar to an American drink called a daisy, made with brandy, so it’s also possible that the margarita is simply a variation of that drink created during Prohibition, when people commonly went south of the border to get their hands on Mexico’s most popular spirit, tequila.

No matter which story you believe, the margarita is here to stay. This margarita recipe, featuring ruby red grapefruit juice and colored salt or sugar is a colorful and tasty spin on what may or may not be an American classic.