A new study has people talking about red meat and the effect eating it has on the body. Read on to see what a registered dietitian has to say on the subject. 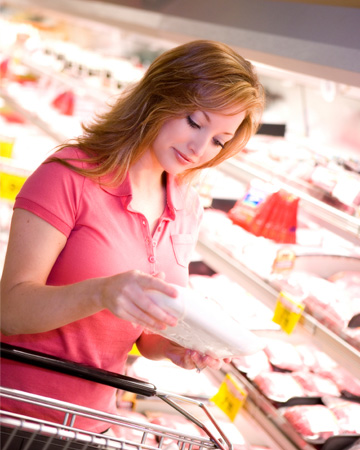 Harvard School of Public Health recently published a study linking red meat consumption to increased risk of premature death. The study, which observed over 120,000 men and women for more than 20 years, documented a combined total of 23,926 deaths. Of those deaths, 5,910 were caused by cardiovascular disease and 9,464 were from cancer.

The increased risk of mortality associated with regular red meat consumption by the participants was 13 percent for one daily serving of unprocessed red meat and 20 percent for one daily serving of processed red meat. Researchers estimated that 7 to 9 percent of those deaths could have been prevented had the participants eaten less than 0.5 servings of red meat per day. The study suggests replacing a serving of red meat with a serving of a healthier protein associated with lower mortality risk, such as fish, poultry, nuts or grains.

Read more on red meat and your health >>

The ABCs of red meat’s effects

Joni Rampolla, registered dietitian and Director of Nutrition and Wellness for Medifast, provided her insight to how eating red meat affects your body:

“Red meat is high in saturated fat and “bad” cholesterol, which can raise blood cholesterol levels and clog arteries, increasing risk of heart disease. Saturated fat has also been linked to colon and breast cancers. Several research studies show an association between processed red meat (sausage, ham, bacon) and colorectal cancer. Red meat contains many nutrients, including iron. Iron in meat has been linked to heart attack, fatal heart disease and oxidative damage to cells, which can lead to cancer. Cooking red meat at high temperatures can release nitrosamines, which have been linked to an elevated risk of developing cancer. The high sodium levels in processed meats (sausage, ham, hot dogs) can raise blood pressure, which can lead to an increased risk of heart disease. Preservatives such as nitrates in processed meats have been linked to increased risk of cancer.”

A healthier choice to red meat

She recommends, as the study does, eating healthier proteins in place of red meat, and eating red meat no more than two to three times a week at most. Using the meat as an “extender” to the meal by adding small amounts to stews or casseroles keeps the portions very small and instead focuses on the other ingredients.

Chemicals that increase cancer risk, such as heterocyclic amines (HCAs) and polycyclic aromatic hydrocarbons (PAHs), form when meat is cooked using high temperature methods, Rampolla says. Instead of pan frying or grilling over a direct flame, try trimming all excess fat to reduce flare-ups and cooking over a lower heat, discarding any charred pieces. While meat cooked for longer periods of time increases cancer risk, she notes that it is still important to cook it thoroughly. To avoid food-borne illness risks that are associated with undercooked meat, cooking to medium doneness is best.

What can you do now?

Even if you’ve eaten red meat your whole life, you can still make changes now that will benefit your health, including reducing your risk of premature death by up to 19 percent. “Small changes can have a big impact on your health, our public health outcomes (reducing health care costs) and environmental impacts,” Rampolla says.