In an effort to make the Passover Seder more relatable to a younger crowd, the guys behind San Francisco’s Sipping Seder have created a series of cocktail recipes, each inspired by an element of the traditional Seder plate. 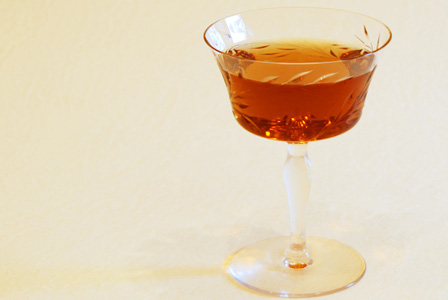 The Jewish holiday of Passover is rife with food symbolism. Each of the six elements on the traditional Seder plate play a role in the dinner and represent a piece of the Passover story. Maror, or bitter herbs, represents the bitterness of being slaves in ancient Egypt, while a shank bone recalls the sacrificial lamb.

These are not easy flavors to translate into cocktails, but Rob Corwin and Danny Jacobs of the Sipping Seder have done just that. Fortunately, they haven’t always gone the literal route with their interpretations, and instead try to capture the spirit of each component.

Charoset, a sweet mixture of apples, walnuts and honey, represents the mortar used by Jewish slaves in Ancient Egypt to build storehouses. In the hands of Corwin and Jacobs, it is transformed into a smooth, pleasantly sweet cocktail comprised of honey vodka, sweet vermouth and cinnamon. And they describe their maror cocktail as a “borscht martini.” For more Passover-inspired libations, visit the Sipping Seder website. L’chaim!

Reprinted and adapted with permission from the Sipping Seder

Reprinted and adapted with permission from the Sipping Seder
Yields 1