Ben & Jerry’s apple pie ice cream has a new name as the company shows its support of gay marriage in Britain.

Ben & Jerry’s has repackaged their apple pie ice cream flavor as Apple-y Ever After, available in select Britain stores. The carton got a makeover as well, now depicting two men standing atop a wedding cake wearing tuxedos. This change shows the company’s support of Britain’s proposed legislation to legalize gay marriage, which Parliament starts debating this week. 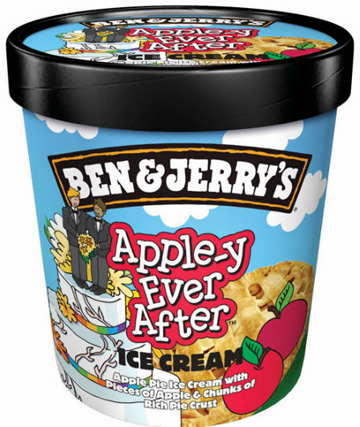 Ben & Jerry’s in the news after unveiling Schweddy Balls flavor >>

There’s an app for that!

Along with the new ice cream name, Ben & Jerry’s has also teamed up with Stonewall, a gay rights organization, to develop a Facebook app that allows users of the same sex to marry each other in support of the legislation. Once married, the happy couple’s photo is posted on the Ben & Jerry’s U.K. Facebook page.

This is not the first time Ben & Jerry’s let the world know that they want everyone to live “apple-y ever after.” In 2009, the Vermont-based company also showed their support of gay rights when Vermont legalized same-sex marriage. Chubby Hubby became Hubby Hubby for a month to celebrate the new legislation.