The popular couture cupcake shop, Sprinkles, just made fulfilling your cupcake craving even easier even if it comes in the middle of the night. 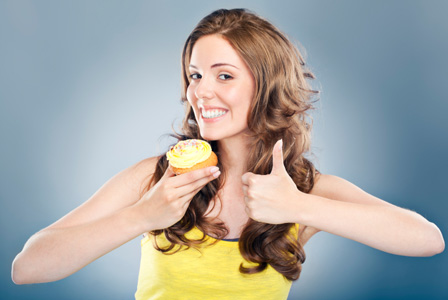 Sprinkles Beverly Hills is the first location to be privy to a pink cupcake dispensing machine. Unlike most vending machines, these cupcakes haven’t been sitting in the machine for several weeks. In fact, just behind the machine are colorful grates where cupcake connoisseurs can see the 600 freshly baked cakes just waiting to pop out of the machine.

Cupcakes at the touch of a button

The touch screen machine is as simple as any bank ATM. Simply slide in your card, select your flavor of choice, and voila, a freshly boxed cupcake is ready to go. You’ll have to bring your own milk though, as the machine only satisfies cupcake urges. There is a small price for convenience. The cupcakes at the machine will cost $4.00 compared with $3.50 in store. The machine will only accept debit and credit cards.

Read about the founder of Sprinkles’ appearance on Cupcake Wars >>

The only problem we see is that if your cupcake doesn’t come out, there is no option to shake the machine like we do when the vending machine won’t release our Doritos. Oh and the fact that having access to Sprinkles cupcakes 24 hours a day probably isn’t the first problem that savvy engineers should be focusing their energy on. We do commend Vineet Chaplot, the engineer behind the cupcake ATM, for his efforts though. What are your thoughts on a martini machine, Vineet?

New York is next in line for a Sprinkles cupcake ATM. Eventually, Sprinkles plans to add cake mixes, apparel and even dog treats to the list of options available from the machine. God forbid if your dog doesn’t get a cupcake too. If cupcake ATM’s become the norm, what’s next? Pretty soon we may never have to speak to anyone again and we’ll be able to fulfill all of our desires from the comfort of a touch screen.

No ATM in your area? Try this recipe for Guinness cupcakes >>

If you could have access to anything 24 hours a day, would it be cupcakes? If so, what’s your flavor of choice?

A disturbing trend: More cavities in children
Food additives that will make you squirm
Spice up your weight loss regimen with saffron extract