Is the cure for AIDS hiding in a batch of fermented tea, yeast, sugar and bacteria? 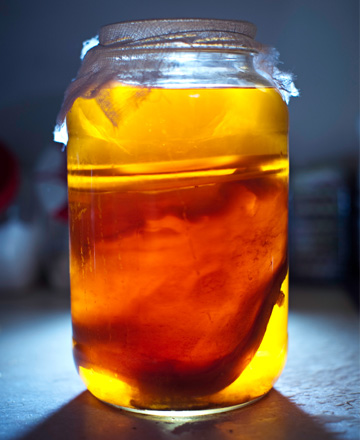 For many people hopping on the Kombucha tea train, the answer is simple: yes! Others believe it can also cure baldness. However, not all opinions of this murky, goopy tea are positive. There have been hospitalizations and even deaths associated with people gulping it down like water. So where do you stand? Are you brave enough to drink this mysterious elixir?

According to the International Buisness Times, Kombucha tea has become really trendy recently due to the surge of hipster-esque foodies, intelligentistas and even celebrities like Halle Berry and Lindsay Lohan chugging the stuff. In fact, according to the IBT, Kombucha tea and other juice/tea products raked in over $295 million in profits in 2010 alone.

In addition, there have been many new records of real health benefits of the tea, such as the ability to fight wrinkles and boost the immune system. Plus, WebMD claims Kombucha tea is full of Vitamin B and other minerals that have been known to fight cancer. But, that’s not all! The tea can even balance our bodies PH and increase blood circulation, which, as you may know, is linked to a higher libido.

The good, the bad and the ugly

Cancer fighting vitamins, the ability to fight wrinkles and more circulation to my happy spot just by drinking juice? It’s not hard to see why millions have started buying this stuff off of the shelf or taken to producing it at home. In fact, the Bay area of California is spewing with tons of the home brewed tea.

However great the benefits are, don’t hop on the bandwagon yet. There are also some pretty serious negative side effects that may change your mind.

For example, none of the so-called health benefits are validated, according to a top doctor at the Mayo Clinic. But faulty health claims aren’t all that should deter you. Two women in 1995 who had reportedly drank the tea daily for months were diagnosed with severe acidosis and hospitalized. Plus, one woman died of cardiac arrest just two days after admittance. Cancer.org has also cited several deaths because of Kombucha tea.

Whether you believe the facts or not, drinking a tea that is fermented with bacteria and yeast doesn’t sound the least bit appealing. If you are trying to lose weight or rejuvenate your body, stick with green tea. Not only does it increase your metabolism, it also hasn’t caused any deaths. Which is enough for me.