Mardi Gras is synonymous with many things: beads, Bourbon Street, Hurricane cocktails, Cajun food, and of course, King Cake. In the midst of Mardi Gras celebrations, it’s hard to miss the colorful dessert known as King Cake dusted with green, gold and purple sugar and containing a special surprise for one lucky eater. What better time to try this sweet treat than on Fat Tuesday?

Related story Yes, You Should Celebrate Mardi Gras With Kids — Here's How 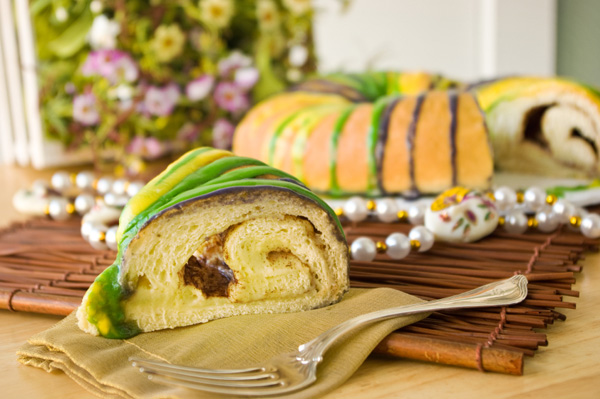 King Cake, which takes its name from the biblical three kings, is a dessert most often seen during Carnival season (starting on Epiphany Eve and ending on Fat Tuesday) and is a staple of pre-Lenten celebrations. Although King Cake is most commonly associated in the U.S. with Mardi Gras, the cake actually dates back to early pagan Europeans.

Make your own delicious King Cake at home >>

The story behind the cake

The round shape of a traditional King Cake is said to be a reference to the route of the three wise men or to a king’s crown. Throughout the years though, King Cake has taken many forms and variations with different shapes, flavors, colors and fillings.

However, one thing always remains the same: There is a hidden trinket baked inside the cake. This trinket is often a plastic baby figurine said to represent baby Jesus but can also be a bean or a coin. The lucky one who finds this trinket is said to have good fortune for the coming year and is appointed mock king for the evening, ruling over the festivities. Unfortunately, early pagan customs did not ensure such luck to the possessor of the trinket. After his year of king-like treatment, the not-so-lucky one was sacrificed as a way to ensure a good harvest.

On this last night before Lent, celebrate with a King Cake and see if you’re the lucky one who gets to be king for the day.