Diet soda is easier on your waistline, but a new study shows that it is harder on your heart. 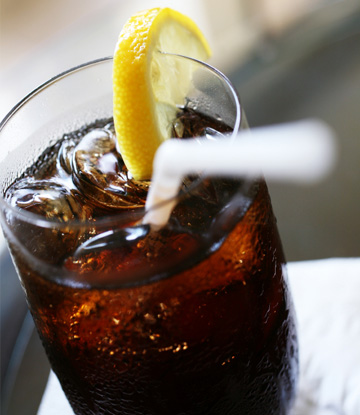 As far as food vices go, a diet soda a day doesn’t seem so bad.

But a new study has found that people who drink diet soda daily might be at an increased risk of suffering strokes, heart attacks and death from such heart-related conditions.

The health benefits of choosing a low-calorie soda over a full-sugar fizzy drink have become, well, a bit more fuzzy.

The study, which was conducted by researchers from the University of Miami and Columbia University Medical Center in New York, found that participants who drank diet soda every day were 43 percent more likely to have suffered heart trauma than those who didn’t drink any.

Is it time to ditch diet soda altogether?

Not so fast. The findings certainly paint a grave picture, but the study’s lead researcher says more analysis is necessary before concluding that diet soda is dangerous. An association between diet soda and heart trauma is there, but a cause-and-effect relationship hasn’t been found.

“Not enough research has been done to really warrant any public health message,” says Hannah Gardener, Sc.D., epidemiologist in the Miller School of Medicine at the University of Miami.

Meanwhile, Gardener points out that giving up diet soda wouldn’t deprive anyone of key nutrients — in other words, giving it up couldn’t hurt.

What about regular soda?

The study also looked at consumption of regular soda and a more moderate intake of diet soda, and the findings might sound surprising — neither appeared to be linked to a higher risk of strokes and heart attacks.

“We are not advocating that people switch from diet soda to regular soda,” Gardener says. “There is plenty of evidence out there showing negative health consequences with regular soda consumption.”

For the study, Gardener and her team analyzed data from 2,564 participants, looking at how often they drank diet soda and regular soda, and tallying the number of so-called vascular events that occurred over a decade. The results took into account such preexisting conditions as body mass index, diabetes, high cholesterol and hypertension.

The study was published online in the Journal of General Internal Medicine in January.

Though this recent study underscores that the long-term health effects of diet soda are unclear, the worries for people who drink soda — regular and diet — continue to mount. Among them: