The notorious Heart Attack Grill is in the news again and this time the medical crisis isn’t just a clever pun. 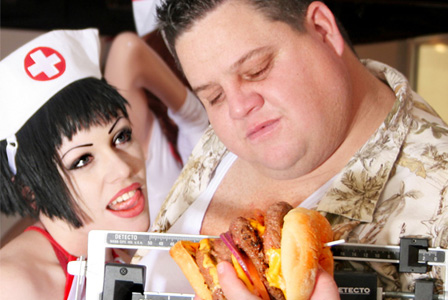 The controversially unhealthy Vegas eatery lived up to its name last Saturday when a man suffered cardiac arrest mid-meal. The man was eating a Triple Bypass Burger, a house specialty that includes roughly 6,000 calories. The burger includes three slabs of meat, 12 pieces of bacon, cheese and a special sauce and that’s just the burger. It also comes with fries that are cooked in pure lard.

Is Heart Attack Grill to blame? >>

Onlookers thought it was a stunt cleverly staged to enhance the atmosphere that includes waitresses adorned in scantily clad nurse uniforms and an owner that refers to himself as a doctor. However, the heart attack was real and came complete with sweating and chest pain.

“Doctor” Jon Basso said, “I actually felt horrible for him because the tourists were taking photos of him as if it were some type of stunt. Even with our own morbid sense of humor, we would never pull a stunt like that.”

This isn’t the first time the Heart Attack Grill has been connected with serious medical emergencies. Just a year ago, their 29-year-old spokesperson died. He weighed in at 575 pounds. The unnamed man involved in this incident is still alive and recovering.

The restaurant whose slogan is “Taste Worth Dying For” is known for glorifying obesity and poor health. In fact, the restaurant offers free food to anyone who weighs in over 350 pounds. It turns out that the warnings hanging in the restaurant are real and all jokes aside, heart attacks are no laughing matter. Eat at your own risk.

Try these heart healthy recipes instead >>

Watch: Man taken out of Heart Attack Grill by paramedics

About 30 seconds in, paramedics wheel a man out of the Heart Attack Grill on a gurney.