While some of us are busy in New Orleans collecting beads and drinking Hurricanes on Bourbon Street, others see Mardi Gras, or Fat Tuesday, as a delicious excuse to eat all the rich and fatty foods they can. 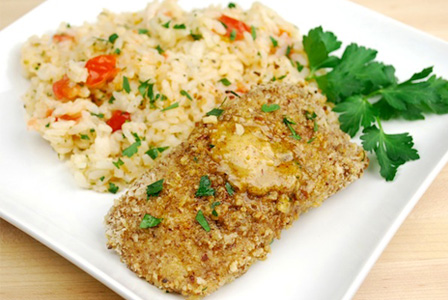 New Orleans is synonymous with dishes like jambalaya, gumbo, dirty rice, crawfish boils and beignets. But that’s just the tip of the iceberg when it comes to Creole and Cajun-style cooking, which has been influenced by a unique blend of French, Spanish, Italian, Portuguese, African and Southern cooking styles, among others. As much as New Orleans is known for its raucous celebration of Mardi Gras, it is equally famous for a cuisine that has no shortage of spice and flavor.

Here, a pecan-crusted catfish recipe borrows from the South, except that it is baked and not fried. (Although we are celebrating Fat Tuesday, you’ll be glad for this waistline saving aspect come Wednesday.) Cajun seasoning lends a little spice, as does the quintessential hot pepper sauce, Tabasco, which actually originated in Louisiana.