If you believe bacon is only good for a burger topping or as a side with your pancakes, it’s time to think outside the box… or just stop by Jack in the Box. The fast food joint has brought bacon and ice cream together in marriage, creating an odd dessert. 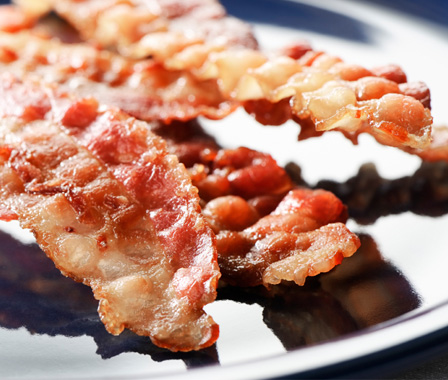 If your milkshake isn’t bringing all the boys to the yard, it’s probably because it’s missing one key ingredient: bacon. After all, Jack in the Box has made it pretty apparent how much people love bacon with their new Marry Bacon campaign, where the slogan reads, “Love bacon? Marry it.”

Bacon and ice cream: A match made in heaven

The Huffington Post reports that the Jack in the Box bacon milkshake is available at the fast food joint, but only for a limited time. Awesome! The sugar laden dessert is now complete with salty meat. But this isn’t just another menu item. Oh no, it’s top secret stuff.

“The shake is not listed on our menus in the restaurants, so it’s more of a ‘secret item’ that people can order,” a Jack in the Box spokesperson told the Huffington Post. “Each restaurant is getting a very limited quantity, so we don’t know how long they will last.”

The bacon appears to be out of the bag, as news of this calorie bomb spreads. A large bacon milkshake (24 ounces) packs a diet busting 1,081 calories and 54 grams of fat.

If you think the bacon milkshake sounds odd, you’re not alone. However, bacon has been making its way into dessert for a while now. We even have a popular recipe for maple bacon cupcakes, so you can enjoy dessert with your breakfast. Or is it breakfast with your dessert?

For those who must try the bacon milkshake from Jack in the Box, get yourself to the drive through ASAP. You don’t want to miss out!

Just so you don’t think we’re making this whole “Marry Bacon” thing up, you can watch the Jack in the Box commercial clip. No, there’s no mention of the bacon milkshake, but after seeing this, it’s not hard to believe it exists.