Despite McDonalds’ seemingly good intentions behind its use of “pink slime” in its burgers to fight bacteria commonly found in meats and produce, the controversial additive didn’t do the fast food giant any favors. 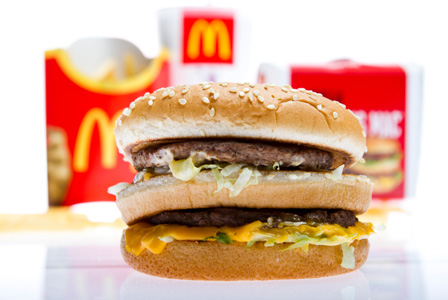 Although McDonald’s claims that the decision to discontinue the slime was made over a year ago, many still believe Jamie Oliver’s Food Revolution played a big part in the decision.

McDonald’s announced this week that it has completely eliminated the use of the “pink slime,” a.k.a. ammonium hydroxide, from its famous hamburgers, according to MSNBC. The slime, a common ingredient in household cleaners and some explosives — no joke — was used to kill bacteria found in meat. Despite the USDA claiming this is “generally safe to use for food,” the public was outraged when it was discovered and publicized by chef and TV personality, Jamie Oliver.

An episode of Jamie Oliver’s Food Revolution, titled “Pink Slime,” aired in April of 2011. Oliver labeled the pink slime “the cheapest form of dog food” and called the use of it in food “shocking.” (View Jamie Oliver’s episode on pink slime.)

Even though Oliver’s episode was seen both nationally and internationally, McDonald’s claims the discontinuation of the product was not tied to one event, but instead was made to further its compliance with standards for the global raw beef movement.

This is demonstrated by recent McDonald’s commercials, including interviews with ranchers and produce famers, which show a trend toward more local, farm fresh products in its restaurants. In addition, McDonald’s claims that the pink slime has been off the supply chain since August of 2010, months before Oliver’s episode aired.

Whether you believe it or not, I’ll argue the best way to avoid pink slime — or any slime, for that matter — in your burgers is to cook them at home.

Do you believe McDonald’s removed “pink slime” from its meat on its own or as a result of Jamie Oliver’s show?

Heading to Vegas? Watch out for the water
Paula Deen admits to having Type 2 Diabetes
The best and worst of Girl Scout Cookies