Searching for game day recipes that are anything but ordinary? These recipes from one of Indianapolis’ most notable chefs will win over football fans and the food obsessed.

In Indianapolis for Super Bowl XLVI, there’s no doubt that visiting foodies will flock to Recess and Room Four, two restaurants that showcase seasonal ingredients from nearby farmers. With Recess, chef-owner Greg Hardesty has become a star on the Indianapolis dining scene by offering a set four-course menu that changes daily. Hardesty’s Room Four is next door, with an a la carte menu and lower prices than Recess, but in the same spirit. 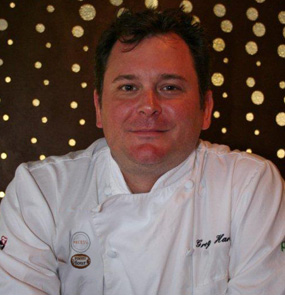 So, how does one of Indy’s most notable chefs do Super Bowl party food?

“It all kind of starts with those classics — chips and salsa, guacamole, buffalo wings — and then you try to be a little more creative,” Hardesty says.

All that you love about chicken wings — spicy sauce, crunchy celery and blue cheese — reimagined as lettuce wraps. Serve them on a big platter, or set out the chicken and toppings in small bowls and let guests build their own wraps. “If you’re having a big party, build-your-own wraps are a lot easier on the host,” Hardesty says.

Part potato skins, part nachos, these spuds are topped with a smoked salmon-white bean mash, Cotija cheese and radishes. Hardesty’s fancy take on game day fare is rooted in familiar tastes: “Something creamy, something smoky and something cheesy,” he says. 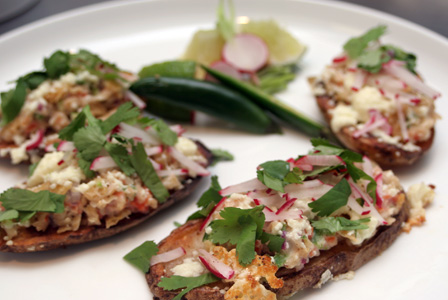 This banh mi sandwich will blow away any foot-long sub that you planned to order. Hardesty has given this classic Vietnamese street food his own twist by adding chicken rillettes, a pate-like meat. “Bright, raw ingredients tie it all together,” Hardesty says, referring to the cucumbers, carrots, cilantro and other herbs that are heaped on top of the sandwich.

Keep in mind that the rillettes need to be made a day ahead. If you’re pressed for time, substitute shredded rotisserie chicken for the rillettes.

For the chicken rillettes: