Pesto is a great sauce over pasta and meat. But use it as a pizza sauce and you’ve got a healthy dinner the kids won’t be able to get enough of. 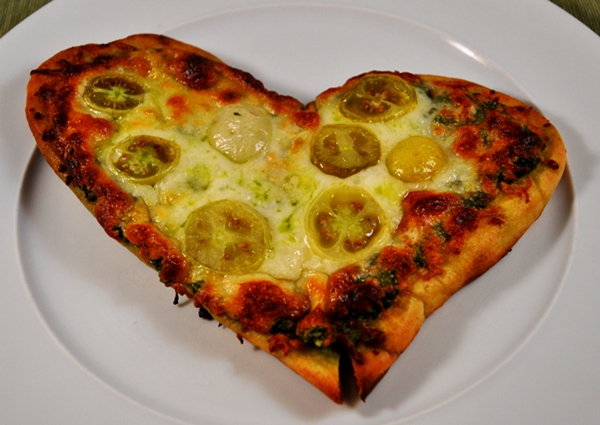 My family is a big fan of pizza. Usually it’s pepperoni, sausage and mushrooms, but every so often, we’ll mix things up by adding extra tomatoes or using a new and inventive type of sauce. Recently, Parents magazine had a recipe for a pesto pizza that used pesto and naan for its sauce and crust. My whole family loves naan and I thought the pesto would be a delicious alternative to the standard tomato sauce.

But since I’ve been trying different pesto recipes and I wanted to guarantee that my son would eat the pizza, I didn’t want to use your basic basil pesto. Luckily Stacie over at One Hungry Mama had a kale pesto that sounded amazing, and since I’m attempting to be a little healthier, I decided to give her pesto a try. It was delicious! Topping it with some Italian cheeses and heirloom cherry tomatoes made for a pizza that I not only loved and will make again and again, but had my son begging for seconds as well.

(adapted from One Hungry Mama and Parents magazine)

This New Costco Bakery Item Has a Decadent & Delicious Surprise Inside