Ravioli is a favorite among adults and kids alike. But instead of the standard meat or cheese-filled pasta pillows, why not try a veggie-filled version covered in a veggie flavored sauce? Adults will love it and kids will be begging for more. 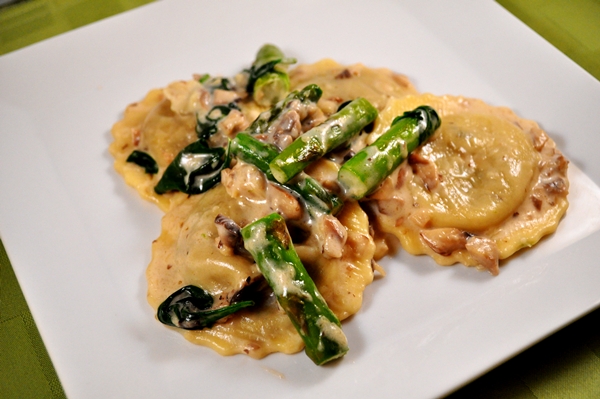 A couple of weeks ago, I was doing some shopping at Trader Joe’s. If you’ve ever visited a Trader Joe’s, you know there’s always someone toward the back of the shop handing out samples of their latest and greatest dishes or drinks. This time was no different. The sample they were handing out was a mushroom, asparagus and spinach tortellini. It was delicious and when I asked for the recipe, the woman was kind enough to point to the pre-made dinner that only needed to be cooked in the microwave for three minutes. It wasn’t what I had in mind, but it made me realize I could easily make my own version at home. While it did take longer than three minutes for me to get dinner on the table, my version was healthier and still super easy to make.