Have you been watching all the lists of food trends over the last several weeks? It’s fun to see all the opinions and predictions, but one that’s been going strong is Meatless Monday — and it’s expected to grow in 2012. 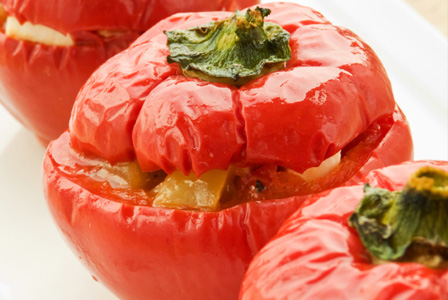 You may have seen info lately about flexitarian diets. This is simply a diet that focuses on plant-based, vegetarian meals, with meat making an appearance once in a while. It’s no wonder Meatless Monday is a food trend that has really caught on and continues to grow. Instead of committing to a full-time vegetarian style of eating, many people are going flexitarian. This is what the Meatless Monday program promotes: eliminating meat from your meals at least one day a week.

The benefits of a flexitarian diet

The added benefit of a flexitarian diet? You’re sure to find many new recipes to try in 2012 that you may not have otherwise! Set your sights on the year ahead with healthier eating habits and new, delicious dishes to go along with them! Try this recipe for quinoa-stuffed bell peppers. They’re filling, colorful and nutritious.

Meatless Monday is a non-profit initiative of The Monday Campaigns, in association with the Johns Hopkins Bloomberg School of Public Health. Meatless Monday was introduced in 2003, and since it started, many organizations have implemented “meatless Mondays” into their dining plans. From Hollywood stars to restaurants to hospital and school systems nationwide, people are out in full-force participating in the movement. Looking for more info? Check out Meatless Monday for yourself!