Just when you thought your after-dinner TV session was safe, Fear Factor returns after a five year hiatus. It is perfect timing really; watch just half of the grotesque show and your New Year’s diet resolution will be easier to keep than ever before. This season promises to be grosser and more intense than it was the first time around. 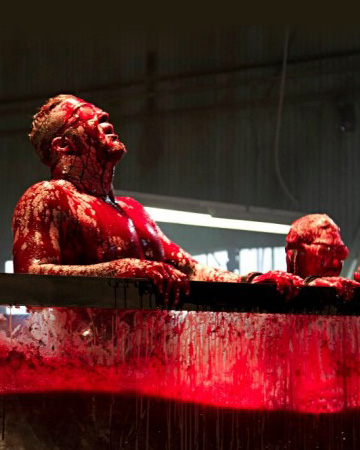 As if jumping out of a helicopter or dangling from a car suspended high above the earth wasn’t enough, contestants have to prove their courage by eating items that most animals wouldn’t even touch, even if they were starving. The menu in the past has included items like horse rectum, pig liver, tarantulas and earthworms. Most people would gag just thinking about eating any of that, but it is about to get a whole lot worse.

Call it an attempt to boost NBC’s dismal ratings or perhaps to just bring back a show that fans loved, but either way, the Fear Factor creators are hard at work to ensure that the new season tops all the gross challenges on the first run of the show. Last night’s show included a challenge where contestants had to eat live scorpions. In an interview with the NY Times, contestant Anthony Bell said, “I was totally caught off guard,” by the intensity of the challenges. “I physically wanted to cry,” he said.

The format will be much like it was before including a physical stunt, gross-out stunt and a grand finale. Although calling stunts like diving into a 3,000 gallon tank of cow blood to retrieve cow hearts with your mouth simply a gross-out stunt may just be the biggest understatement of the year. The show will require contestants to be bigger and braver than ever before if they want to win the $50,000 prize but clearly viewers will have to be held to the same standard.

Have your barf bag ready

In 2005, a viewer attempted to sue the show for causing him to vomit and injure himself after watching an episode. Much like the contestants that can’t handle the challenges, he didn’t win any large sums of money and the case was thrown out. Watch at your own risk and be prepared to heave. The new season airs Monday nights on NBC at 9/8c.

How gross is too gross? Where would you draw the line when it comes to eating items seen on the show?

Would you eat horse meat?
Weird food from around the world
Top 10 craziest eating habits