Risotto typically has chicken, shrimp or vegetables in it, but what if you added vanilla beans to the mix? Your savory dish turns into something slightly sweet and unexpectedly delicious. 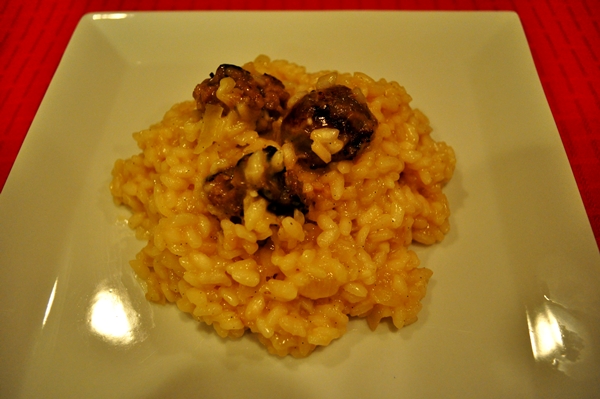 A couple of months ago, I participated in a Twitter chat that was all about vanilla. Everything from the bean to the extract was covered and how to use it. Normally I break out my vanilla solely for desserts, but several people talked about using the bean or extract in their savory dishes. All the recipes sounded out of this world, but there was one that sounded especially intriguing — vanilla risotto.

Now of course I’ve had rice pudding, which is thick and sweet and definitely has a strong vanilla flavor, but the risotto the other cooks were talking about was definitely of the savory variety. You still used chicken or vegetable stock and you could even throw in a protein or a vegetable to make it a more substantial entreé. As soon as I heard this, I knew I had to try it. And let me tell you how happy I am that I did. The subtle vanilla flavor turns the risotto completely on its head, and stirring in a nice fruity sausage enhances the flavor even more. So the next time you’re making risotto, throw in a vanilla bean or two. You’ll be astonished by the rich flavors.