Give your soups and sauces an especially smooth texture and nutty taste by mixing up a batch of roux. This flour-based thickening agent can be made in large quantities to be stored for future use. So even if you don’t plan on making a soup or sauce today, make a roux for the week and plan your meals around its use. 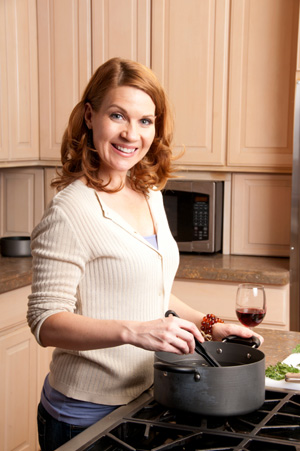 Roux are fairly simple to make, but it’s important that you understand the different varieties and their uses before getting started. There are four different types of roux — white, blonde, brown and dark brown. The flavor and thickness of the roux changes based on how long you cook the ingredients:

White roux: Cooked for approximately 5 minutes, the white variety is the thickest roux designed to be used in chowders, macaroni and cheese and milk-based sauces.

Blonde roux: Cooked for approximately 20 minutes, this light, golden-colored roux smells a little like popcorn or toasted bread. Like the white roux, this roux is one of the most common thickening agents used in day-to-day cooking. Blonde roux are especially good for stock-based sauces, stews and chilis.

Brown roux: Cooked for approximately 35 minutes, the brown roux has a light, peanut-butter-like color with a vaguely sharp aroma. The brown roux is thinner in consistency than either the blonde or white variety, and its flavor is richer, making it a popular choice for gumbo or Creole-style recipes.

Dark brown roux: The dark brown roux is the thinnest roux of the bunch because it has been cooked for approximately 45 minutes. Due to its thinness, its primary purpose is to add flavor, with its thickening properties the secondary purpose. You know you have a dark brown roux on your hands when its color reaches a milk-chocolate appearance. Like the brown roux, it is most commonly used in Cajun dishes.

All you need to make a roux is fat and flour. Choose your fat based on personal preference — clarified butter, vegetable oil, olive oil or even bacon grease are all appropriate options. Place one cup of the fat of your choice in a sauce pan over medium-high heat until it melts. Sprinkle a dash of flour into the fat to see if it will bubble. When bubbling occurs, gradually whisk 1 3/4 cups flour into the fat, stirring the mixture constantly.

Continue whisking the flour and oil at a steady rate while monitoring its temperature and color. The constant stirring will help prevent the roux from burning. You want the roux to bubble lightly without reaching an outright boil. When the roux reaches its desired color, remove it from the heat, pour it into a metal container and allow it to cool.

Step 4: Store and use your roux

After the roux has cooled, pour it into an airtight container and store it in your fridge. You can keep it stored in this fashion for several weeks without worrying that it might spoil.

Because the flour will begin to separate from the oil, you’ll need to stir the roux before adding it to a recipe. Also, to ensure clump-free soups and sauces, always add cold ingredients to hot ingredients. This means that you should whisk a cold or room temperature roux into an already-hot soup or sauce.

Watch: How to make soup from leftovers

Turn mealtime odds and ends into a hearty — and tasty — soup.

For more household tips, check out:
Super Moms guide to cleaning & cooking for the family