With 29 contestants and a side competition that takes place online, Top Chef: Texas is stepping it up this season. 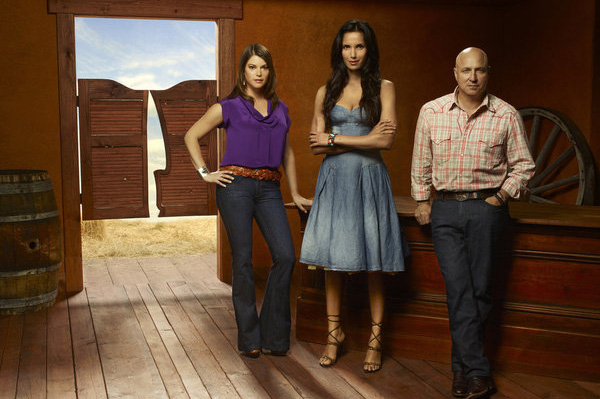 If everything is bigger in the Lone Star State, what does that mean for Top Chef: Texas?

For starters, season nine of the Bravo show boasts the most contestants ever — 29 chefs descend on the Alamo for the premiere of the show on Nov. 2 at 10 p.m. EST/PST. They stop in Austin, Dallas and San Antonio for challenges throughout the season.

Fans can also expect an extra serving of competition. Eliminated chefs will compete on webisodes for a chance to return to the show, and possibly earn a spot in the finale.

“I’ve actually cooked with Charlize, and she is a serious, serious foodie and loves to cook,” says Tom Colicchio, Top Chef‘s head judge.

But Pee-wee? What’s he doing on Top Chef: Texas? Could it be a nod to Pee-wee’s Big Adventure, the 1985 movie where he visits the Alamo on a cross-country hunt for his stolen bike?

“That’s it! What else do you need?” Colicchio says.

Clips and promos of the new season show no shortage of Texas clichés, including Padma Lakshmi gracefully biting at ribs while perched on bales of hay.

“There’s clearly a challenge where we talk about ribs,” Colicchio says, adding that Texas is actually known more for brisket than ribs. “Some things couldn’t be avoided.”

Of the 29 chefs picked for the premiere, only 16 will make it past the first episode’s cooking challenge. In a way, the first episode is the last part of the casting process. Since chefs are chosen based on resumes and interviews, this test makes sure that they can really cook before moving on, Tom Colicchio says.

“Sometimes you get a clunker,” Colicchio says. “There were some people who we were led to believe would’ve been great contestants, really strong cooks, and they weren’t good at all.”

Many of chef contestants this season are from Los Angeles, Chicago, Seattle and New York City. Just two Texans are in the group, and both hail from Austin.

“The talent is as good as any season,” Colicchio says.

In a twist, eliminated chefs are given a second chance to compete on a weekly webisode series called Top Chef: Last Chance Kitchen hosted by Colicchio.

“It addresses the person whom the viewers think got a raw deal,” Colicchio says. “It gives that person an opportunity to get back in.”

The chef who wins Top Chef: Texas will receive $125,000 furnished by Healthy Choice, a feature in Food & Wine magazine and a showcase at the Annual Food & Wine Classic in Aspen.

While taping Top Chef: Texas, Colicchio and Lakshmi snuck in some sightseeing, shopping and dining out.

“You’re eating so much on set, you’re not rushing to go out to eat again,” Lakshmi says. “But one of the reasons Tom and I are very good at our jobs is because we do have an immense capacity to put food away.”

Padma Lakshmi, a former supermodel, says it’s common for her to go up a dress size during a season. Slenderizing clothes mask the extra weight, she says.

“Usually I do gain about 10 to 15 pounds,” Lakshmi says. “You don’t notice it because I have a really good wardrobe person.”