Jon Bon Jovi’s latest project won’t make the top ten list, but it is sure to be a hit. The Soul Kitchen is a restaurant designed to build community and restore hope to those who are struggling. 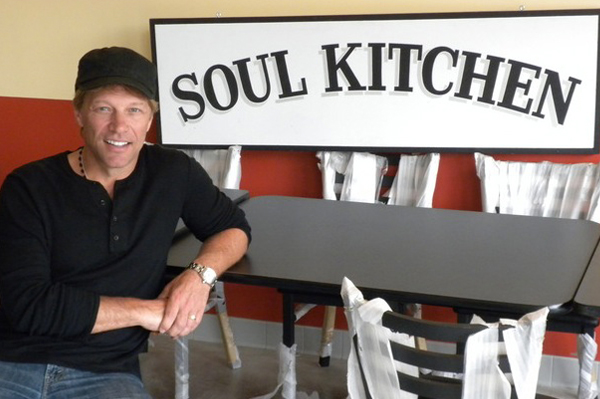 The future of soup kitchens may be getting a facelift thanks to rocker Jon Bon Jovi. The Soul Kitchen is the latest project for Jon Bon Jovi’s Soul Foundation and with the simple slogan of “Hope is Delicious,” their goal is to do more than just fill bellies.

The restaurant sits along the tracks in Red Bank, New Jersey near Bon Jovi’s home. What was once an old auto mechanic shop is now a cozy cafe with a healthy menu to boot. Menu items like salmon and catfish may seem normal, but what sets this menu apart is that you won’t find any prices next to the items. If customers can afford the meal, they are encouraged to leave a donation, and if not, they are required to work in the restaurant or the community to earn their meal. A minimum donation of $10 is suggested, while any extra will go to feed a neighbor in need.

Unlike most community kitchens, this charity restaurant isn’t meant to simply feed the hungry but rather to build community in an area that is often divided. Anyone can volunteer to serve tables, wash dishes, set tables or help in various other ways to ensure that everyone who walks in the door leaves full and filled with hope.

Teach a man to fish

If you make the trip, you might even see Bon Jovi himself except he won’t be the live entertainment — he’ll be washing dishes. He hopes others will follow in his footsteps to start creating community instead of simply handing out free food. Using the “teach a man to fish” model, he believes people will leave with dignity knowing they have earned their meal.

In a time when one in six Americans worries about where their next meal will come from and many more have had to give up the luxury of eating out, Soul Kitchen provides a much needed treat for many families who are struggling. The swanky interior will please any restaurant goer, making it the perfect fit for those in need and those simply in search of a good meal. You may even be seated with a stranger in hopes of encouraging patrons to get to know their neighbors.

Soul Kitchen is currently open from 5-7 p.m. on Thursday, Friday and Saturday. Reservations are encouraged and can be made by calling 732-842-0900.