Brussels sprouts can sometimes get a bad rap. You’ve heard (or experienced) that they smell funny or that they get mushy. Well that may be because of how they’ve been cooked. For one simple trick, give them a quick pan fry in some olive oil for a few minutes on high heat. They won’t get the mush — or stink — factor. But there is more to Brussels sprouts than what you’ve seen in the past. 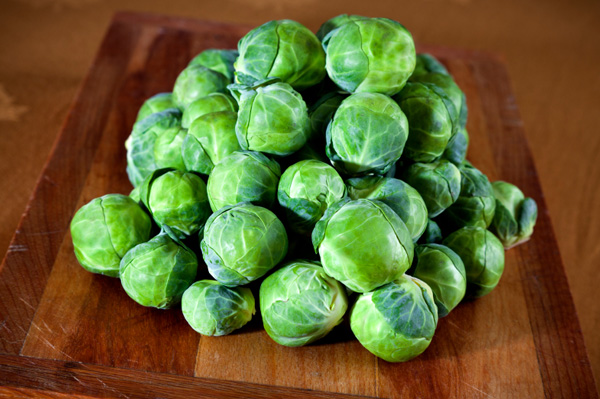 As an autumn staple, you’re sure to see Brussels sprouts at all your local markets. If you’ve been avoiding them, you really should give them another go! Brussels sprouts are part of the cruciferous family (other members include arugula, broccoli, bok choy, cabbage, cauliflower and radishes to name a few) and are loaded with fiber, vitamins (A, C and K) and folate.

The vitamins in Brussels sprouts help to ensure a healthy immune system, ward off hypertension, lower blood pressure and help to maintain healthy bones, teeth and eyes. Wow! Talk about a powerhouse veggie!

Get a little creative for a new taste

Most people have also heard of or experienced the classic Brussels sprouts dish prepared with pancetta. Well for Meatless Monday, Brussels sprouts get a bit of a makeover, served in soup and topped with a fantastic hazelnut pesto — quite an about face from the green veggie you once knew (and maybe avoided).

Pesto is such an easy thing to whip up in a short time. Did you know you can use asparagus, spinach, kale and peas (among other things) as a pesto main ingredient? This version is also different from standard recipes since it relies on hazelnuts as its main ingredient, adding a nutty flavor that pairs perfectly with your Brussels sprouts soup.

Before going meatless, consider these easy substitutions from the Meatless Monday organization:

Check out this list of “movers and shakers” who are joining the Meatless Monday movement, including the following:

If you hate the taste of Brussels sprouts, it’s likely genetic. Prove it to your mom and dad with the Pro Biotech’s open source PCR project!